Bargain hunters hit the shops yesterday morning to take advantage of the Black Friday sale, with some having queued overnight to snap up deals and limited-edition items.

Contractor Koh Tzu Yang, 19, took a day off work to be among the first to buy Uniqlo's newest additions to its Kaws x Sesame Street collection of apparel and plush toys.

The second instalment of the limited-edition range, a collaboration between New York-based artist Kaws and children's brand Sesame Street, was launched online at midnight yesterday.

To beat the online crowd, Mr Koh headed down to Uniqlo's flagship store at Orchard Central from his home in Punggol to join the queue, waiting from as early as 1am.

"I think the toys are cute and I like collector's items. It's a good thing I came early, looking at the queue now," he said.

A crowd of about 100 had formed by the time doors opened at 10.30am, with the Japanese fast-fashion brand offering discounts on many of its items.

Over at Ion Orchard, personal care and beauty store Sephora opened an hour early at 9am and offered a 15 per cent discount on all items. It saw a healthy crowd by 9.30am.

Student Louisa Chan, 21, arrived 10 minutes ahead of the opening and spent about $480 on skincare products she had been eyeing.

"The Black Friday discounts are great - they give people something to look forward to," she said.

The annual sale originated in the United States and is held on the Friday after Thanksgiving, which is celebrated on the fourth Thursday of November. The sale has become known for the big discounts offered by retailers and in-store chaos caused by stampeding shoppers.

Along with the online Singles' Day sale on Nov 11, Black Friday has been gaining traction in Singapore in recent years as shoppers scoop up year-end deals and do their early Christmas shopping.

A spokesman for furniture and electronics retailer Courts, which is offering up to 23 per cent off until Monday, said its pre-Black Friday sales held earlier in the week were nearly double that of last year's.

Madam Saadiah Abas, 54, a tourist from Brunei in town for a wedding, said she stumbled upon the sale at BHG in Bugis Junction, where discounts of up to 80 per cent are on offer until tomorrow. 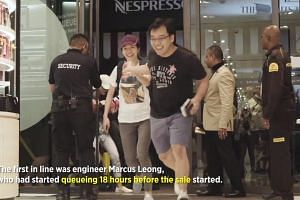 Long queues form ahead of Black Friday at Robinsons

The retiree and her family bought about $200 worth of apparel and jewellery at a 20 per cent discount.

"I didn't know about Black Friday, but we saw the sale and came to shop. It's cheaper than what I would have to pay back home since there's a discount," she said.

Housewife Mary Teng, 56, who was watching a cooking demonstration in the crowded Tangs basement during lunchtime yesterday, said she had come hunting for cookware, which was up to 50 per cent off.

Free cups of coffee were handed out to shoppers at department store Metro's Paragon outlet, which offered discounts of up to 90 per cent.

Retired public servant Gay Tennant, a tourist from Australia on a five-day trip to Singapore, bought a pair of walking shoes from Metro for $28 after a $15 discount.

"I didn't know about the Black Friday sale but I love the shops here. I come once a year at least and get some Christmas shopping done," said Madam Tennant, 80.