SINGAPORE - Weekends are usually the busiest days for Mr Leong Yong Huat, the manager of a foot reflexology centre in Ang Mo Kio, but on Saturday afternoon (July 6), there were only a handful of customers.

Mr Leong, 38, told The Straits Times that it was one of his worst business days ever.

His shop, The Foot Pavilion, is near the site of a fire on Friday at Block 720 Ang Mo Kio Avenue 6 which injured eight people.

The fire gutted a paint shop and three units operated by retailer myCK, as well as their living quarters above.

The fire, which has affected the supply of power and electricity to the block, has resulted in Mr Leong losing about 50 per cent of his usual business.

"We are safe and we are lucky we can still open, but there is no phone line here, which means my customers cannot make bookings and can only pay with cash. Even when they walk in, they do not want to stay because there is no Wi-Fi," he said.

Mr Leong is not alone, as other shopkeepers and employees also bemoaned the lack of Internet service and for some, electricity.

Hair Journal, a salon next to the site of the fire, could not open for business on Saturday. Staff were told they would be without power for "a few days".

One of them, who declined to be named, said: "There is nothing we can do but wait. Usually today we are very busy, but what can we do? "

When ST visited the site on Saturday afternoon, there were about 100 people who had gathered to see the fire damage. Melted cans of paint, rubbish bins and burnt wiring were among what was left in the shops.

Home owners of the low-rise HDB block, who are now living in temporary accommodation, returned to their flats to retrieve their belongings.

On its Facebook page, the Housing Board said that the fire affected four shops on the ground floor and their living quarters on the second floor.

"All occupants of the 16 shops and 28 residential units in the block were evacuated by SCDF and the police. We have helped to arrange temporary accommodation in our vacant flats for six families who have no alternative accommodation."

"Our appointed independent professional engineer has inspected the building and assessed that it is structurally safe. There is some localised spalling at the shop units," it said.

HDB added that it will carry out more detailed checks once the debris and soot are cleared and will continue to render all necessary help to the affected households and shopkeepers.

The cause of the fire is still under investigation.

When the SCDF responded at 3.45pm on Friday, the fire had already engulfed the ground floor and was threatening to spread, it said. A total of 19 emergency vehicles and about 60 firefighters were deployed, and the fire was brought under control by 4.30pm. 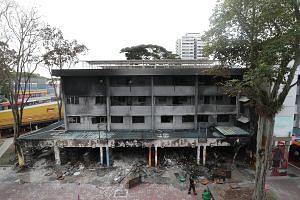 Eight people, including an SCDF officer, had to be taken to hospital.

An SCDF spokesman said: "A full-time national serviceman firefighter was conveyed to hospital. He was warded overnight for observation and has been discharged from hospital this afternoon.

He also thanked the chairman of Ang Mo Kio Merchants Association, Mr Lim Kien Huat, for providing mattresses and pillows for these residents.

Prime Minister Lee Hsien Loong, also an MP for Ang Mo Kio GRC, said in a Facebook post on Friday: "Please continue to look out for each other, and my thanks to all who came forward to help. We hope those who are injured will recover well too."