Parent body, rifle group disagree on who will operate facility after upgrading to meet security rules

The armoury from which the police seized more than 70 weapons last week has come under the spotlight in an ongoing legal tussle between the parent body overseeing shooting in Singapore and the Singapore Rifle Association (SRA), which runs the armoury.

The Singapore Shooting Association (SSA), which wants to upgrade the space at the National Shooting Centre in Old Choa Chu Kang Road, in line with new security requirements, had asked the SRA to hand over the space.

But the SRA refused to meet the deadline of Oct 3 last year, countering that the one-month notice to clear out is invalid and too short. 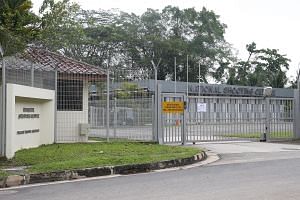 The SRA is also counterclaiming for breach of agreement, arguing that there was an understanding that it would continue to operate the armoury and office after it signed a fresh pact - known as the proprietary range agreement - in 2014.

The SRA, in defence papers filed by its lawyer Wendell Wong, argued that when the 2014 agreement allowed it to maintain a shooting range for 10 years, there was also an implied agreement that it was entitled to operate, manage and occupy the SRA armoury and office for a similar 10-year period.

This was the understanding, given that the range and the premises were inseparable functions in the context of the sport. The SRA said it was ready to do its part to pay for upgrading works to the SRA armoury to meet new police requirements.

The upgrading works include replacing the existing gates with a vault door and grille gate, making sure that firearms and ammunition are stored in separate storage cabinets to meet required specifications, and installing closed-circuit television cameras to monitor activities within the armoury.

The SRA claimed the deal was to formalise its right to manage and operate the armoury and office when the upgrading works were done.

But the SSA disputes this, countering that it was instead agreed that it would do the upgrading works and be reimbursed by the SRA, and it would then lease the armoury to the SRA for ammunition storage only.

In court papers filed by its lawyer Anthony Lee, the SSA said the police had advised it of new security requirements in November 2014, which included those pertaining to the SRA armoury, and the SRA was aware of them.

The SSA council's adviser, Brigadier-General (Ret) Lim Kim Lye, then suggested a single-armoury concept, including a centralised place to keep all firearms and some ammunition and a basement vault to keep most of the ammunition.

But in May last year, the police met SSA officials and expressed concern that the SRA had not complied with the security requirements, said court papers.

The SSA said at a council meeting four days later that it was agreed that a ground-level armoury run by the Singapore Gun Club (SGC) would be the only firearms store at the National Shooting Centre, while two basement armoury rooms would be used to store SRA and SGC ammunition separately.

The move was to strengthen workflow and security to put into effect the single-armoury concept, and the meeting agreed to it. But one month later, the SRA said it had not agreed to the armouries being shared and had to ask its members.

The SSA said it was in this context that it made clear to the SRA on July 21 last year that it owned the National Shooting Centre facilities and that after upgrading was done, the SRA armoury would be leased to the SRA only for ammunition storage.

Deadlocked, the SSA gave the SRA a month's notice last September to quit the armoury. It pointed out that the SRA's chairman had replied a week later to ask for six months' notice, which implied that the SRA understood that the SSA had the right to revoke the lease.

A pre-trial conference is due to be held in the High Court this month.