At 25, Ms Annabelle Kwok has already made a name for herself.

Two years ago, she made waves when she co-founded SmartCow, an artificial intelligence (AI) company that came up with an electronic board that could run various AI software.

Last year, Ms Kwok left SmartCow and started NeuralBay, a company that focuses on detection and recognition software related to humans, objects and text, and offers AI-driven solutions for multinational corporations. Her clients include an aviation corporation, an automation industry company and chocolate company Ferrero.

Ms Kwok traces her interest in tech to a box of Lego bricks with electric cables called Lego Mindstorms, which her parents, who work in banking, bought for her when she was in primary school. With it, she built her own robots.

Ms Kwok, the younger of two children, picked up computer science in Temasek Junior College's integrated programme. To avoid getting caught playing games on her laptop during lessons, she learnt how to operate multiple systems concurrently within her computer.

"That's where I trace my hacking roots," she said with a laugh.

The Nanyang Technological University (NTU) mathematics graduate has many interests: She is a circus performer, short film-maker, hardware hacker, mixed martial arts fighter, licensed windsurfer, and once sang in a band. But what Ms Kwok wants to do in particular is to use her expertise to do good. 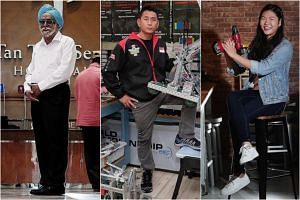 A lifetime of nursing work helped when Sars struck

When she was 12, the former girl guide went on a relief mission to Phuket, which was badly hit by the 2004 tsunami. More than 200,000 people were killed in 14 countries.

"When you smell rotting corpses and see ruins, you realise how much of a cushy life you have. It was a big shock," she said.

At 19, she went to Togo in West Africa to volunteer with NTU. She found that many locals did not have easy access to mosquito sprays despite malaria being endemic there. "Why are mosquito repellents not available to people who need it the most? We push the frontiers of science, we do so many things to innovate, but it is not always inclusive."

This motivated her to do good.

"That's why I'm running my own company. I have the independence to share useful technology with smaller businesses that may not have resources to build it from scratch," said Ms Kwok, who recently partnered local charity Daughters Of Tomorrow to hire low-income women to identify and label objects in images for her firm.

"Technology is a bridge. We can use it to make the world a more inclusive place," she said.