SINGAPORE - Home Affairs and Law Minister K. Shanmugam has given another interview about the proposed fake news law to be read for a second time in Parliament on Monday (May 6).

The hard-hitting journalist interviewing him? None other than Ah Lian, a well-known local Internet personality and the alter ego of actress Michelle Chong.

"Today lim bu (Hokkien, referring to herself) is want to talk the serious thing. Eh! This thing ah is matter to all of you now watching," Ah Lian opens the video in her trademark vernacular style, gesturing vigorously.

In the clip shared on Facebook by both Chong and Mr Shanmugam on Sunday, Ah Lian sits down with the minister at the Law Ministry and proceeds to ask him questions about the proposed Protection from Online Falsehoods and Manipulation Act (Pofma).

Among the topics covered in the eight-minute clip are the differences between fact and opinion, examples of fake news, and issuing corrections.

At one point, Ah Lian says: "Honestly, my gan kor (godbrother) tell me hor, actually this Bill is so we cannot anyhow say the gahmen. He say one ah, not I say one!"

Mr Shanmugam clarified that such criticisms would not be covered by the proposed law. 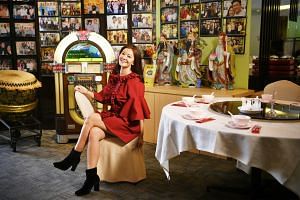 Lunch With Sumiko: Michelle Chong is a one-woman showstopper

He also pointed out that "liking", commenting on and forwarding news that could be fake are all not covered by the law. Satire and parody, such as Ah Lian's videos, are not covered as well.

Besides discussing Pofma, the video also has many informal, light-hearted moments.

At the start of the interview, Ah Lian tells Mr Shanmugam that it is her first time seeing him "in real life" and asks for a selfie. However, a person off camera reminds her that she has an interview to conduct first.

At the end of the clip she tries again, but is again unsuccessful.

Ah Lian also attempts to give the minister a high-five, but Mr Shanmugam smiles and says "okay".

The clip has been viewed over 87,000 times and has garnered more than 1,700 shares in the six hours since Chong shared it on Facebook at 9am.

In a Facebook post at about 2.30pm, freelance journalist Kirsten Han, who has been a vocal critic of Pofma, said of the clip: "They are trying very hard indeed, but not engaging with the substance of the criticism."

Commenting on Mr Shanmugam's post of the clip, Facebook user Chua Wui Lik said he found the video simple to understand. "I hope ordinary folk understand the meaning of this new piece of legislation and its implications."

The video is the latest in a series of engagement efforts since the Bill was first tabled last month, including attempts by Mr Shanmugam to address concerns.

Most recently, the minister sat down with The Straits Times to discuss Pofma in an interview published on Saturday.

He also penned commentaries carried by both ST and Channel NewsAsia on Friday, which addressed the points made by two Senior Counsels and three nominated MPs on the Bill.