SINGAPORE - Seniors make up almost half of the Covid-19 cases in the four clusters in Bukit Merah and Redhill, raising concerns about the risk of severe illness among older patients in the ageing estate who are not vaccinated.

According to an analysis by The Straits Times, 46.9 per cent of the 98 cases linked to clusters in the area comprise patients aged 60 and above. The median age among all the cases is 51 and more than half - 55.1 per cent - are female.

About two in five of the seniors in the clusters are not vaccinated, while the rest of the seniors have received at least one dose of the vaccine. In total, about 56.1 per cent of the cases in the four clusters have not been vaccinated.

"I am worried for our residents, especially when there are vulnerable elderly living in Bukit Merah View, and the risk of severe disease increases with age," she told ST on Wednesday (June 23).

At the same time, she noted that not all of the cases are residents in the constituency, as they also include stallholders, visitors and their household contacts.

The cluster that has attracted the most concern so far is the one at 115 Bukit Merah View Market and Hawker Centre, which has swelled to 82 cases as at Wednesday night.

It is now Singapore's largest open cluster, since the first case was reported on June 10.

The once-lively Bukit Merah View neighbourhood, popular for its hawker fare, is now quiet as customers stay away.

Mr Wong Ming Kee, 67, a Bukit Merah View resident who works in housekeeping at a hospital, is also concerned about a number of elderly in the neighbourhood who do not follow the rules, such as not wearing their masks properly. 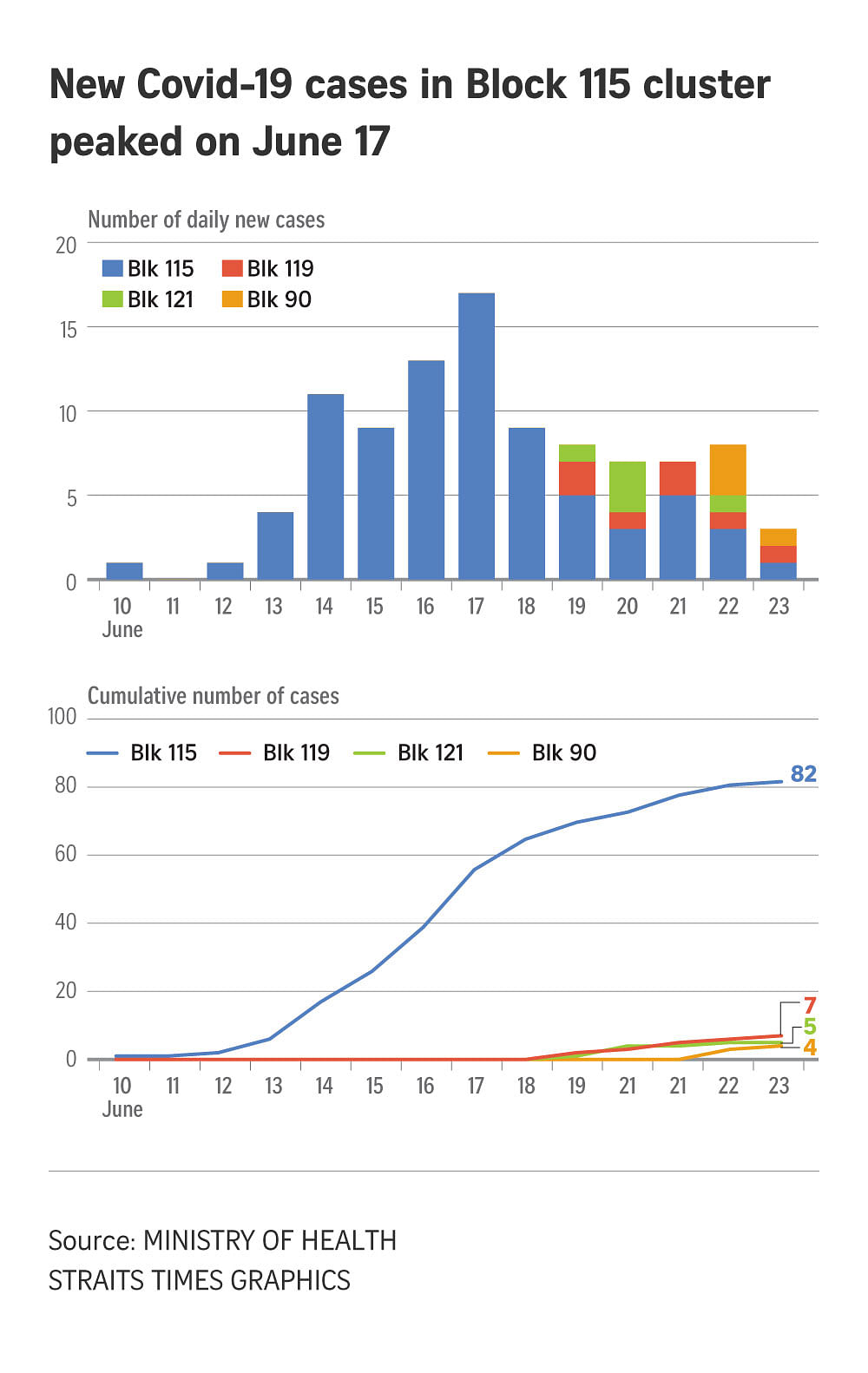 "When I tell them to pull up their mask, they scold me. I'm worried for my own health, so I don't loiter around after buying necessities," he said.

To detect cases in the area, multiple rounds of testing operations have been organised, with 2,133 residents and visitors of eight blocks in Bukit Merah View tested.

Of this group, five tested positive for Covid-19, the Ministry of Health said on Wednesday. A swabbing exercise for seven blocks in Redhill also wrapped up on Wednesday.

Three residents at one of the blocks had earlier tested positive for Covid-19, forming part of the cluster at Block 90 Redhill Close announced on Tuesday.

"We are anxiously waiting for the results of the swab tests for the rest of the residents," Radin Mas MP Melvin Yong told ST.

Ms Pereira is concerned about less mobile seniors whose grocery buying has been affected by the market's closure. To help them, volunteers in the Henderson-Dawson ward have increased the frequency of meal deliveries to residents.

She noted that at least three-quarters of those aged above 60 in her ward have received two doses of the vaccine. Volunteers will continue to step up efforts to encourage other seniors to go for their jabs, she added.

Professor Dale Fisher, an infectious disease expert at the National University of Singapore, said vaccinated people usually have milder symptoms or are asymptomatic. 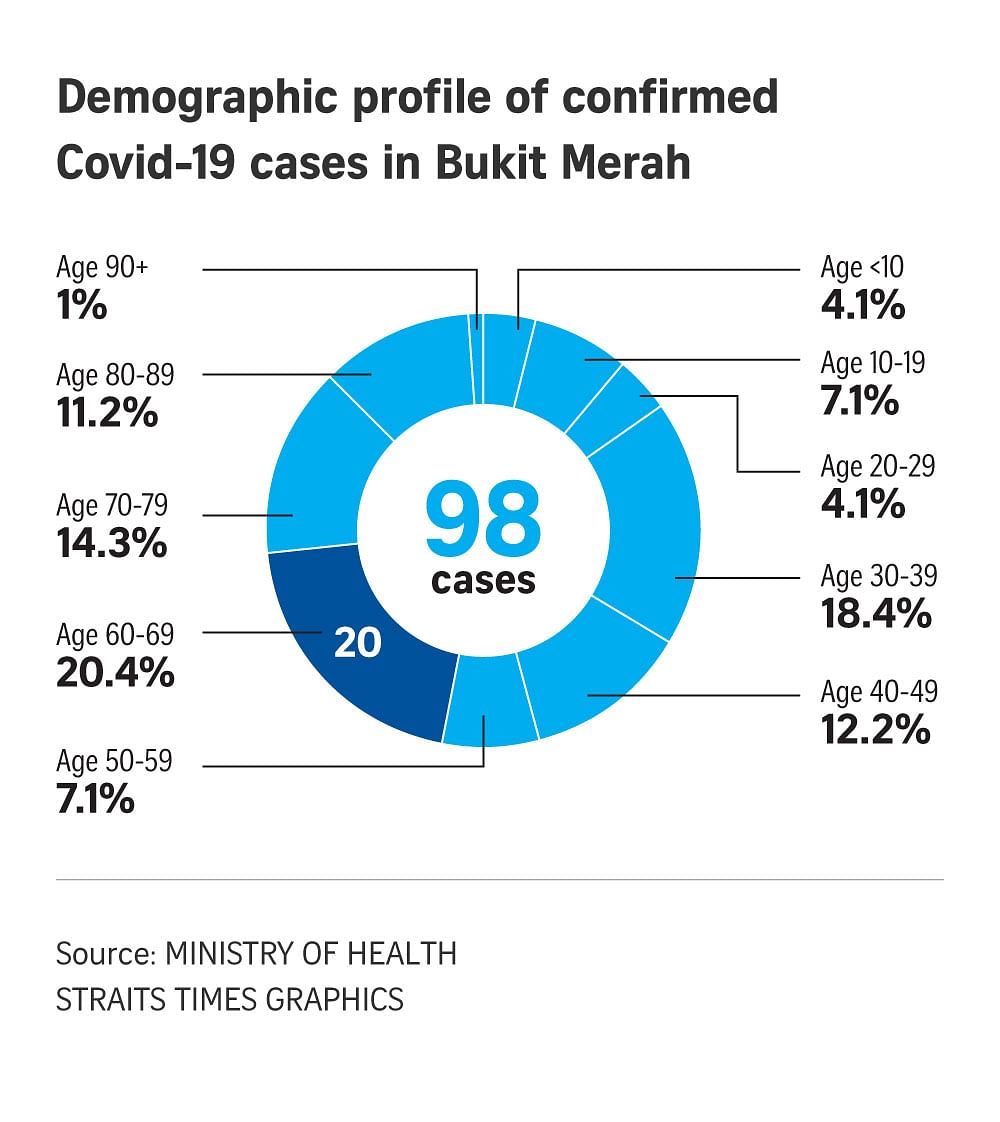 As older people are more likely to have been vaccinated, this means there are fewer clinical features to aid investigations in the Bukit Merah and Redhill clusters.

The virus, which has also become more transmissible, thus becomes harder to control in this period of "partial vaccination", he noted.

Mass testing is required to find the cases and trace the virus spread, and many cases are unlinked as a result of this new transmission dynamic. "Fortunately, most of the more vulnerable are vaccinated," he added.

For now, Bukit Merah View resident Long Wei Ai, 80, is taking things in her stride. "I'm already so old, so I'm not so worried about my own health," she said.

She looks forward to going out when the situation improves. "I just hope all this blows over soon." 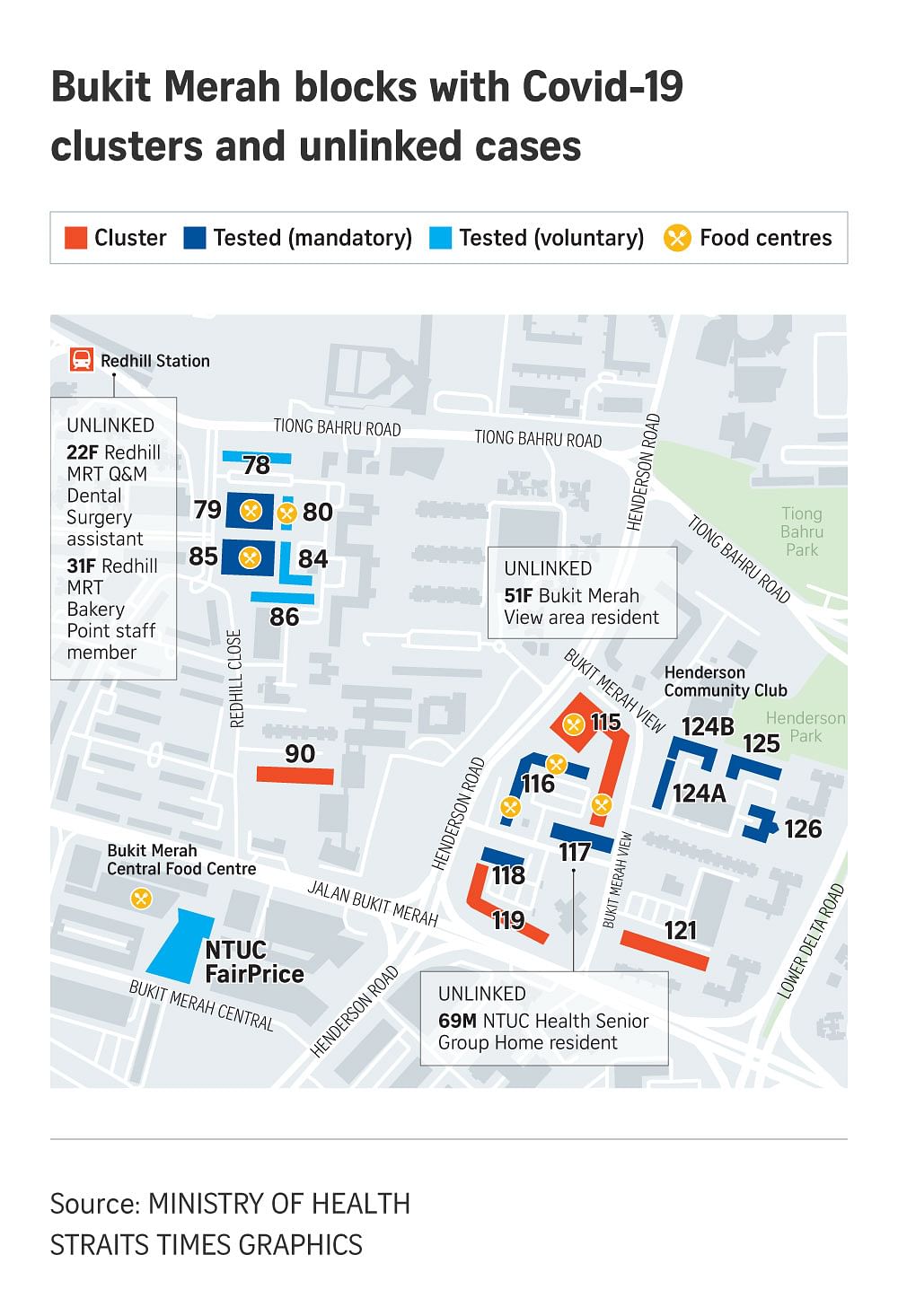 A sundry store worker, 74, is reported as an unlinked case. He later becomes the index case of a cluster at 115 Bukit Merah View Market and Hawker Centre.

The newly-formed cluster grows to six cases. All staff and tenants at the market and Block 116 are to be tested. Visitors to the blocks are also offered free testing.

The Block 115 cluster grows to 16 people. Mandatory testing begins for stallholders at Block 116.

The market and hawker center, closed since June 13 for deep cleaning, is to be closed till June 26 as the number of cases grows.

The Block 115 cluster grows to 39 people. The growing cluster is cited in reviewing the timing and scope of Singapore's reopening from phase two (heightened alert).

Of the 383 staff at Blocks 115 and 116, 21 test positive. Of the 4,892 visitors tested, seven test positive. Mandatory PCR testing for staff of stalls at Redhill Market and Food Centre at 79 and 85 Redhill Lane, a few blocks away.

Mandatory testing for all residents of eight blocks in Bukit Merah View, as well as voluntary testing for visitors. This comes after viral fragments are detected in wastewater samples in the vicinity.

Mandatory testing for all residents of seven blocks in Redhill, as well as voluntary testing for visitors. The Block 115 cluster grows to 78 people as new clusters form at Blocks 119 and 121.

The Ministry of Health says it has concluded mandatory and voluntary testing at Bukit Merah View. Of the 2,133 residents and visitors tested, five test positive. There are now 98 cases across the four clusters, including 82 in the Block 115 cluster.