If 2018 trial succeeds, technology may be used for other bus services in five years' time

Singapore's first self-driving buses will hit the roads at Nanyang Technological University (NTU) in 2018, in another trial on the use of autonomous vehicles here.

If successful, experts say the technology could be applied to other bus services in as early as five years' time, starting with shuttle service- type routes with a few stops and predictable traffic conditions.

The trial places Singapore among a handful of cities, such as Helsinki and Perth, which are also testing driverless buses. It will be run by the Land Transport Authority (LTA) and the Energy Research Institute at NTU (ERI@N).The latest pilot adds to Singapore's driverless vehicle push, which includes an on-demand self-driving taxi trial ongoing at one-north. The LTA and JTC are also jointly developing a 1.8ha test circuit at CleanTech Park for driverless vehicles.

The LTA and NTU said yesterday that driverless buses, combined with the rail network and self-driving shuttles or pods for first- and last-mile commutes, will form the future transportation landscape, one "not dominated by roads, carparks and private cars".

"Self-driving buses will arrive at bus stops at precise timings every morning, allowing us to plan our journeys more effectively," they said in a joint news release. "During off-peak hours, these buses will be deployed dynamically based on commuter demand and the fastest possible route, thus reducing the number of vehicles needed to ply the town and maximising the number of commuters on board each vehicle."

For the trial, ERI@N plans to use two electric-hybrid buses, which it will outfit with intelligent sensors, and develop an autonomous system that can navigate local road traffic and climate conditions. The trial is scheduled for early 2018, and starts with a 1.4km route between NTU and CleanTech Park. A year later, the plan is to stretch the route to the nearby Pioneer MRT station.

ERI@N's executive director, Professor Subodh Mhaisalkar, said the institute is studying which brand of bus to use, but it will be picked from among those already used on Singapore's public bus network. 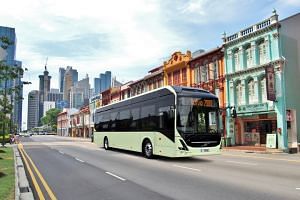 NTU and Volvo Buses to develop electric, driverless buses by 2019

"We want to make sure that once we prove it (the system), there should not be any hindrance to scaling and going from two buses to multiple buses," Prof Subodh said.

Associate Professor Marcelo Ang, acting director of the National University of Singapore's Advanced Robotics Centre, said self-driving buses could be deployed on short routes like a shuttle bus service in as early as five years' time. But he feels that a dynamically routed autonomous bus service may take 10 more years. "For shuttle services, you can programme the buses to anticipate what the traffic conditions are at various times... But for a dynamic route, there are more uncertainties."

Separately, the LTA and NTU also signed a deal to improve rail reliability by developing a real-time condition monitoring prototype. This will help detect early signs of defects in traction power.

A version of this article appeared in the print edition of The Straits Times on October 20, 2016, with the headline 'Self-driving buses to be tested at NTU'. Subscribe
Topics:
More
Whatsapp Linkedin FB Messenger Telegram Reddit WeChat Pinterest Print Purchase Article Copy permalink