SINGAPORE - Meridian Secondary School is appealing for help for one of its students who was injured in December's bus accident along the North-South Highway in Malaysia.

In a letter dated Jan 9, the school reached out to the families of its students to raise funds for Secondary 5 student Muhd Hilmi Mohd Syed.

Hilmi, 16, was among the 14 injured in the accident on Dec 24, when their bus plunged more than 6m off the highway near Muar in Johor. His father Mohd Syed Syed Jamaludin and 13-year-old sister Alifah Aliana were also injured.

Two other Singaporeans - Madam Faridah Tamron and her daughter Hazimah Mustafa - also died in the crash.

The letter stated that Hilmi - who suffered spinal injuries, a fractured leg and a dislocated arm in the accident - underwent a procedure to insert a metal rod into his spine and elbow on Dec 25, and required another surgery for his spine. 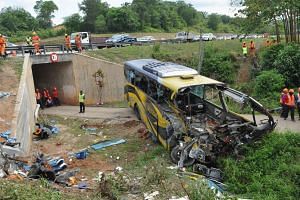 Bus plunges into ravine in Muar killing 14, including three Singaporeans, one PR 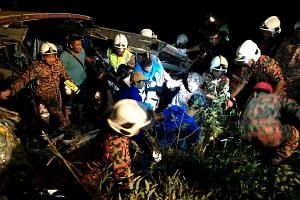 "Currently, his condition is stable but he is unable to feel both his legs. He is still hospitalised and will require a long period of medical treatment for recovery," said the letter, adding that the medical expenses were financially draining on Hilmi's family.

The letter, signed by Meridian principal Mrs Hilda Thong, described Hilmi as a "very polite and respectful student" who was well-liked by his peers and teachers, and said that the school will be collecting donations after its morning assembly from Wednesday (Jan 11) until Friday (Jan 13).

The Straits Times understands that members of the public can also make donations at the school's general office.

Meridian Secondary School confirmed that it was raising funds but declined further comment, adding that the family had requested for privacy.

Fund-raising website give.asia has also started a fundraising drive for Hilmi and his family, to be closed on Jan 25. More details can be found at https://give.asia/movement/help_for_family_of_muhd_hilmi_bin_mohd_syed.