The eight LMVs will do the work previously required by 11 patrol vessels, which have been in service for about 20 years. They also require at least 10 per cent less manpower.

"The security of our sea lanes and our port are affected by piracy, sea robberies, and the emergent threat of transnational maritime terrorism," said Deputy Prime Minister and Coordinating Minister for National Security Mr Teo Chee Hean on Saturday (April 16).

"With its integrated sensors and weapons, as well as advanced C4 systems, the LMV will... enhance our ability to detect and respond to current and future maritime threats," he added.

DPM Teo was speaking at the launch of the LMV at Singapore Technologies Marine's Benoi Yard. 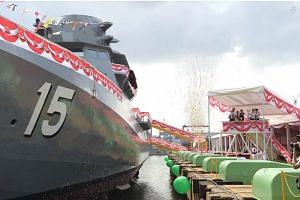 The first, LMV Independence, was launched in July last year and is going through sea trials now and expected to be battle-ready by next year.

"The LMV will be an integral part of RSN (Republic of Singapore Navy) Task Groups and be able to support the full range of SAF (Singapore Armed Forces) missions well," said DPM Teo. "The longer endurance of the LMV, and its systems which are designed for reliability and maintainability, will allow it to conduct operations that are more persistent, and at longer ranges and further distances."

The 80m-long littoral mission vessel is two-and-a-half times bigger than its predecessor and sails further and faster. It can hit top speeds in excess of 27 knots and sail up to 3,500 nautical miles.

Powered by four engines, it can last 14 days at sea. The new warship's integrated command centre combines the combat, engineering and navigation teams, allowing faster and seamless coordination among the sailors.

"The ability to build and design our own ships with a lot of indigenous technology indicates the importance of engineering for Singapore," said DPM Teo. "The ability to do that means we can optimise the platforms that we have: ships, aircraft and land capabilities."

The SAF also has to work well with the Home Team and other maritime agencies, he said, in order to ensure seamless cooperation in defending Singapore's maritime entryways.