SINGAPORE - Less than a week after a record 12.9 tonnes of pangolin scales were seized from a container by the authorities here, another 12.7 tonnes have been uncovered in a joint operation by the National Parks Board (NParks), Singapore Customs and the Immigration and Checkpoints Authority (ICA).

The 40ft (12m) container that was on its way by ship from Nigeria to Vietnam was declared to contain "cassia seeds" but was found on Monday (April 8) to be holding the animal parts, estimated to be worth about $51.6 million, in 474 bags at the Pasir Panjang Scanning Station.

The haul came from two species, the white-bellied tree pangolin (Phataginus tricuspis) and the giant ground pangolin (Smutsia gigantea) and are likely to have come from 21,000 pangolins.

The scales of both species were also found in the previous haul on April 3.

The previous 12.9-tonne seizure of pangolin scales last week was the largest ever on record - surpassing the previous record of 11.9 tonnes seized in Shenzhen, China, in 2017.

The combined 25.6 tonnes seized in the two hauls in April were about 58 times the combined weight of two pangolin scale shipments intercepted in Singapore in 2015 and 2016 that amounted to about 440kg. 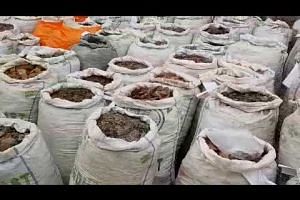 The scales of the pangolin, believed to be the world's most highly trafficked mammal, are in high demand in Asia for use in traditional Chinese medicine despite there being no proven medical benefit from their use.

Singapore is a signatory to the Convention on International Trade in Endangered Species of Wild Flora and Fauna (Cites) and is committed to the international effort to curb illegal wildlife trade.

Elephants and pangolins are protected species under Cites. International trade in elephant ivory and pangolin is prohibited.

Under the Endangered Species (Import & Export) Act, the maximum penalty for illegal import, export and re-export of wildlife is a fine of up to $500,000 and/or two years' imprisonment.

The same penalties apply to transit or transhipment of illegal wildlife species, including their parts and derivatives.