SINGAPORE - Car owners who are season parking holders at Housing Board carparks will no longer need to display the season parking Radio Frequency Identification (RFID) tag on their vehicles from next month.

Earlier this month, some season parking holders received an SMS from the HDB, notifying them that they will no longer need to display the tag from April 1.

In response to queries from The Straits Times, an HDB spokesman said on Thursday (March 15) that the RFID tag is no longer needed as season parking information is now available through other modes.

The spokesman said that as the Electronic Parking System has been implemented at the majority of HDB carparks, season parking information is transmitted electronically.

With the app, enforcement officers are required to key the vehicle number into their electronic hand-held terminals to check for valid parking sessions, said the HDB spokesman.

For public carparks that do not have electronic gantries, enforcement officers can verify the validity of a vehicle's season parking through their electronic hand-held terminals, the spokesman added. 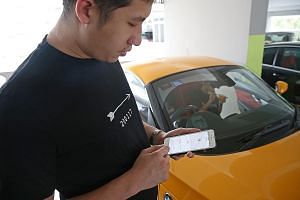 Parking app easy to use, say drivers, but not all are keen

According to the HDB's website, the RFID tag does not store season parking holders' personal information. However, the HDB added that users "may also consider cutting the RFID tag before throwing it away".

The RFID tag, which contains an embedded microchip and antenna, was introduced in 2007 for real-time updates on season parking information, including renewal, change in vehicle, and parking location. Officers would scan the tag to check if motorists have valid season parking.

The HDB spokesman said the discontinuation of the RFID tag would relieve season parking holders of the inconvenience of replacing them when they are damaged or lost.