Ask 62-year-old university lecturer Mohamed Nassir Ismail about his roots and he will proudly declare that he is a "native Singaporean".

Unlike other migrants who settled on these shores after Singapore's growth as a trade hub under colonial rule, Mr Nassir's great-grandfather and his family had already been residing here years before Sir Stamford Raffles' arrival in 1819.

His great-grandfather grew up on the Singapore River in a 3 1/2m long sampan in the 1800s, and was one of the Orang Selat, or People of the Straits.

They are one of the clans of Orang Laut in Singapore history - a general term referring to sea nomads who are believed to have sailed in Singapore's waters from the 16th century.

By the 19th century, there were more than 1,000 Orang Laut residing in Singapore. Pioneer generation minister Othman Wok, who died at age 92 last year, was a descendant of the Orang Laut.

Other clans include the Orang Seletar, who roamed the mangroves near Seletar River, and the Orang Biduanda Kallang, who lived in swampy areas along Kallang River.

Modernisation and rapid development in Singapore from the 1960s led the groups to find new settlements in the waters of Johor. But a number, such as Mr Nassir's family, intermarried and assimilated into Singapore society, and were resettled into Housing Board flats. Figures on how many later settled in Singapore are not available.

Today, more than 50 of Mr Nassir's relatives still live in the same HDB blocks in Upper Boon Keng Road. The location is a stone's throw away from their old water village of Kampung Kuchai off Lorong 3 Geylang, where Mr Nassir lived till he was 18, before it was demolished in 1976.

He recalls with nostalgia the gotong-royong spirit of the kampung, where close to 300 families lived. "If someone had a problem, the whole village chipped in to help."

Not far from Kampung Kuchai was Kampung Padang Terbakar, a coastal village off Somapah Road near Changi, where history teacher Mohamed Shahrom Mohamed Taha's late paternal grandmother, an Orang Biduanda Kallang, lived in the 1970s. It was acquired for industrial development in the mid-1980s.

Mr Shahrom, 39, was regaled with stories of their sea nomad heritage as a child. He said: "My grandmother was a medicine woman. When we fell sick, she would ask us to go to the sea. There was always this idea of returning to the sea."

Gone are the days of seafaring for his family of five, who live in an HDB flat in Tampines but they still observe practices which have been passed down in his family. He does not eat pomfret, and they are also warned against visiting Kota Tinggi in Johor, particularly the areas with higher altitude. 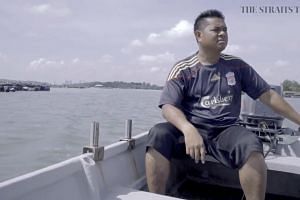 This arises from the fact that his late paternal grandfather was from the Bintan Penaung tribe of the Orang Laut, led by the Laksamana Bintan, a sea admiral of Sultan Mahmud Shah II, the 10th sultan of Johor.

At the height of the Johor Kingdom's power in the late 17th century, the Laksamana had collaborated in the assassination of the Sultan, whose tomb now lies near the Kota Tinggi town centre. The episode had been documented in historical texts such as the Malay Annals.

According to the oral tradition of the Orang Laut, the Laksamana had been instigated to do so, after a plot by a former palace officer. The Sultan then cast a curse on the descendants of the Laksamana, which said that they would die should they touch the grounds of Kota Tinggi.

It is also believed that a school of pomfret had saved the life of the Laksamana by patching up a hole in his boat when he was escaping from the Sultan, thus the tradition of abstaining from eating the fish.

Such stories prompted Mr Shahrom to find out more about the Orang Laut during his time as a history undergraduate at the National University of Singapore (NUS). His thesis countered British misconceptions of the Orang Laut as pirates. Though there were piracy activities, they had also patrolled and protected the maritime trade routes under the control of the Sultan.

Mr Nassir is also working on a book with Dr Imran Tajudeen from the NUS department of architecture, which will feature a chapter on the Orang Selat settlement.

He said: "(Knowing my history) gives me a sense of belonging to this country. We have witnessed so much change, from the kampung days to the metropolitan city that it is today."