SINGAPORE - Passengers on a Scoot flight bound for Singapore were kept waiting for almost 30 hours in Tokyo and Bangkok on Monday (Nov 26) due to an aircraft technical issue.

A spokesman for the budget carrier told The Straits Times on Tuesday that Flight TR869 was due to depart Tokyo for Singapore with a stopover at Bangkok's Don Mueang International Airport at 9.35am local time.

But a technical issue forced the plane to return to Narita International Airport.

"Engineers immediately began rectification works, but in view of the expected time required, a decision was made to ground the aircraft instead," the spokesman said.

Facebook user Jie Vonn Memories said in a post on Scoot's Facebook page on Monday that she was stuck in Bangkok and facing a "horrible delay" of 30 hours.

The Scoot spokesman said that it has tried to transfer some affected passengers to another flight, TR899, which was heading from Japan to Singapore via Taipei.

To ensure that affected customers in Bangkok would be able to return to Singapore as soon as possible, Scoot said that it would have an additional flight, TR8869, which is scheduled to depart Bangkok at 5.10pm local time.

Some customers will also be transferred to TR611, which will depart at 6.15pm local time. A bigger aircraft with more seats would be used for this flight.

Those who were not able to get onto flights from Tokyo or Bangkok were provided with accommodation and meals, where necessary, the spokesman added. 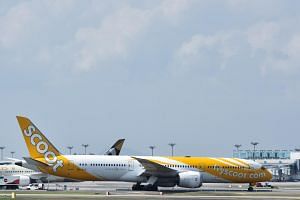 "Safety is our top priority, and we sincerely apologise for the disruption caused to our customers' travel plans."

This is the airline's second reported flight delay in two days.

On Sunday, a Scoot flight to Bangkok was delayed for nearly seven hours due to a technical issue with the aircraft.

Flight TR616 was due to depart the Changi Airport Terminal 2 at 5.30pm, but took off only at 12.28am, after travellers were transferred to a replacement aircraft.

As a result of this, the return Bangkok-Singapore flight was also delayed for about six hours.