When Ms Chew Khee Gek went to school for the first time, she was 11 years old and by far the oldest child in her Primary 1 class. She did not even know the alphabet, could speak to teachers only in Mandarin and - by her own admission - "behaved about the same as a Primary 1 kid".

Yesterday, after working hard to carve a career as a diagnostic ophthalmic technician at the National University Hospital, the 24-year-old received the Healthcare Merit Award - a scholarship given to those with good academic results and a passion for healthcare.

She was one of 134 people to win the award and will pursue a degree in diagnostic radiography at the Singapore Institute of Technology in September.

The Healthcare Scholarships Award ceremony held at Raffles City Convention Centre saw scholarships given out to a total of 189 people for both undergraduate and postgraduate studies.

Ms Chew told The Straits Times that at 16 - when others her age were preparing for their O-level examinations - she had just entered Secondary 1. "All my siblings started school late," said Ms Chew, who has two brothers and a sister. Growing up, their father was the sole breadwinner as their mother had severe mental health issues.

"My siblings and I became the caregivers to our mother. School was not a priority at that time."

Recalling her first days in school, Ms Chew said that it was "very, very hard" to catch up with the rest of her classmates. She was also worried about fitting in socially, although that did not turn out to be a problem. "I was quite short," she said. "And mentally and psychologically, we behaved about the the same as a Primary 1 kid."

Despite the difficult start, Ms Chew went on to enter the Express stream and later graduated from Temasek Polytechnic with a diploma in biomedical science.

She recalled how, about five years ago, her mother began to lose her eyesight because of diabetes. By the time her family found out about it, the damage was done and her mother's vision had been significantly impaired. "I blamed myself... I kept thinking that it was my fault," said Ms Chew, who was sitting her O-level preliminary exams at the time.

"I regretted that I knew nothing about the illness or healthcare. If I had known, we could have brought her to see a doctor." 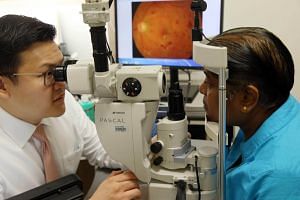 It was this incident that made her determined to join the healthcare sector. She is currently working as a diagnostic ophthalmic technician.

Although her diploma in biomedical science gave her a foot in the door, it limited her to mainly laboratory work. Ms Chew said what she really wanted was a role that would enable her to interact with patients. Hospital visits were always stressful occasions for her mother, she said, and she hopes to help alleviate such feelings in others.

"I can understand how patients feel," Ms Chew said. "I want to help them feel as relaxed as possible. I want to take away some of their suffering and pain."

Health Minister Gan Kim Yong, who spoke at yesterday's ceremony, told the newly-minted scholarship holders of the "challenges... and meaningful work" that must be done in the coming years.

"As healthcare scholars, you play an important role in shaping the future of Singapore's public healthcare system," he said.

"Your journey has just begun - as a healthcare professional, you need to be equipped with both the hard and soft skills to serve your patients and community effectively."

Mr Gan said he was referring to the professional skills needed in their chosen occupations, as well as traits like patience, empathy and compassion for the patients under their care.

A version of this article appeared in the print edition of The Straits Times on July 31, 2018, with the headline 'Scholarships for 189 to pursue studies in healthcare'. Subscribe
Topics:
More
Whatsapp Linkedin FB Messenger Telegram Reddit WeChat Pinterest Print Purchase Article Copy permalink