From Monday, the Singapore Civil Defence Force (SCDF) will no longer convey non-emergency cases to the hospitals, to free up resources for life-threatening cases.

In cases where paramedics arrive at the scene and have assessed that the patient does not need to be conveyed to a hospital, they may treat the patient and advise him to see his own doctor, said SCDF chief medical officer Shalini Arulanandam yesterday.

"If the patients want to go to the hospital of their own accord, they can make their own arrangements or they can call 1777 for non-emergency conveyance," she said.

Instead, the SCDF will be focusing more resources on life-threatening cases that are critically time-sensitive, by introducing "high-performance cardiopulmonary resuscitation (CPR)" in cases of cardiac arrest, with the aim of full implementation nationwide by March 2021.

Currently, four responders - three in an ambulance and one on a fire bike - are deployed to cardiac arrest cases, but this will be increased to eight with the addition of four more responders on Red Rhino vehicles, fire engines or other fire medical vehicles.

Compared with standard CPR, high-performance CPR provides patients with higher chances of survival, said Lieutenant-Colonel (Dr) Shalini, with each responder in the team given a specific role in resuscitating the patient.

For example, two firefighters will take turns every two minutes to perform chest compressions on the patient, reducing responder fatigue that is common in standard CPR.

"The aim is to minimise the interruption to compressions and deliver good quality CPR with good ventilation, which will improve neurological outcomes and survival from cardiac arrest," said Lt-Col (Dr) Shalini. 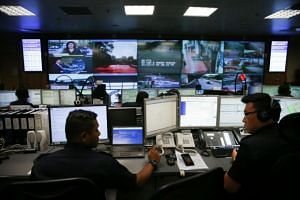 The roll-out will begin with four fire stations and one fire post located across Singapore, as more firefighters are still being trained as certified emergency medical technicans (EMTs). More than 300 firefighters have been certified since 2013, according to the SCDF.

To become certified as EMTs, the firefighters have to undergo a five-week course on assessing the condition of a patient, as well as the basic treatment and protocols involved in certain medical emergencies such as asthma attacks.

Following the course, they will be attached to ambulances to gain experience on the ground.

After their certification, the firefighters will continue to be reassessed every six months.

Cardiovascular disease is a leading cause of death in Singapore, with an average of 2,300 cardiac arrests occurring outside of hospitals annually. However, in 2015, only about one in five patients survived out-of-hospital cardiac arrests.

The SCDF sent a team to the Seattle Resuscitation Academy in the United States in 2016 to learn its best practices, including the implementation of high-performance CPR.

How high-performance CPR is carried out

An emergency medical technician (EMT) arrives at the scene on a fire bike to perform CPR and deploy an automated external defibrillator (AED) that will provide live feedback on the chest compression quality.

This ensures that the chest compressions are done to the ideal depth, at an appropriate rate and with controlled ventilation.

Four more SCDF officers arrive. They include two firefighters who will take turns every two minutes to perform chest compressions, a fire and rescue specialist who will deliver oxygen and ventilation to the patient using a device, as well as an additional EMT who will operate the AED.

The purpose of this team is to provide basic life support to the patient.

The team, comprising a paramedic and two more EMTs, arrives last to provide advanced treatment to the patient.

The paramedic, who is the overall team leader, will operate the ambulance defibrillator.

One of the EMTs will help to set up an IV drip and administer drugs to the patient, while the other EMT will prepare equipment and drugs for the treatment procedures.

A version of this article appeared in the print edition of The Straits Times on March 30, 2019, with the headline 'SCDF will not do hospital run if it's not emergency'. Subscribe
Topics:
More
Whatsapp Linkedin FB Messenger Telegram Reddit WeChat Pinterest Print Purchase Article Copy permalink