A new ambulance model that has its own automatic decontamination system will begin operating later this year - a move that the Singapore Civil Defence Force (SCDF) said will help paramedics be better equipped to handle future pandemics.

The SCDF's seventh-generation ambulance was among the new vehicles unveiled at the SCDF workplan seminar yesterday.

The others include new models of the forward command vehicle (FCV) and command vehicle (CV), which are mobile command posts used in incidents such as major fires and plane crashes that require manpower and equipment from multiple fire stations.

These vehicles - which are the result of a collaboration between the SCDF, the Defence Science and Technology Agency, and Singapore Technologies Engineering - will progressively replace the existing eight FCVs and five CVs in the fleet from July.

The new ambulance is equipped with a built-in system that sprays a disinfectant mist, allowing paramedics to decontaminate the vehicle within 20 minutes.

Currently, the decontamination process takes about an hour and requires an external device.

The ambulance also boasts a solar panel and an intelligent charging system that prioritises critical equipment, thereby allowing it to be readily deployed at locations without electrical power points.

Among other features, it has an electronically controlled loading and unloading system for stretchers that reduces the risk of accidental stretcher drops.

Co-developed by SCDF and the Home Team Science and Technology Agency, the ambulance will be put into use in phases from the second half of this year.

The SCDF has a "very good record in using technology in its functions", Law and Home Affairs Minister K. Shanmugam said in a pre-recorded speech at the seminar yesterday.

He noted that the SCDF has started using virtual reality to supplement ground training, and to expose officers to large-scale and complex incidents. "This simulation environment will allow trainees to learn how to manage incidents in a safe way, and even try out new strategies," he said.

The minister also noted that the Civil Defence Academy (CDA) in Jalan Bahar is currently undergoing major redevelopment, with the first phase of the project expected to be completed this year.

The redevelopment project will take about three years and will add new facilities to the CDA.

These include the Emergency Responders' Fitness Conditioning & Enhancement Lab, which allows SCDF to collect physiological data through simulations, better understand its officers' work-rest cycles and training limits, and customise training programmes for them.

Other facilities include those that mock up various urban settings, such as a bus interchange and an underground MRT station, to simulate large-scale urban fire and rescue emergencies for training. 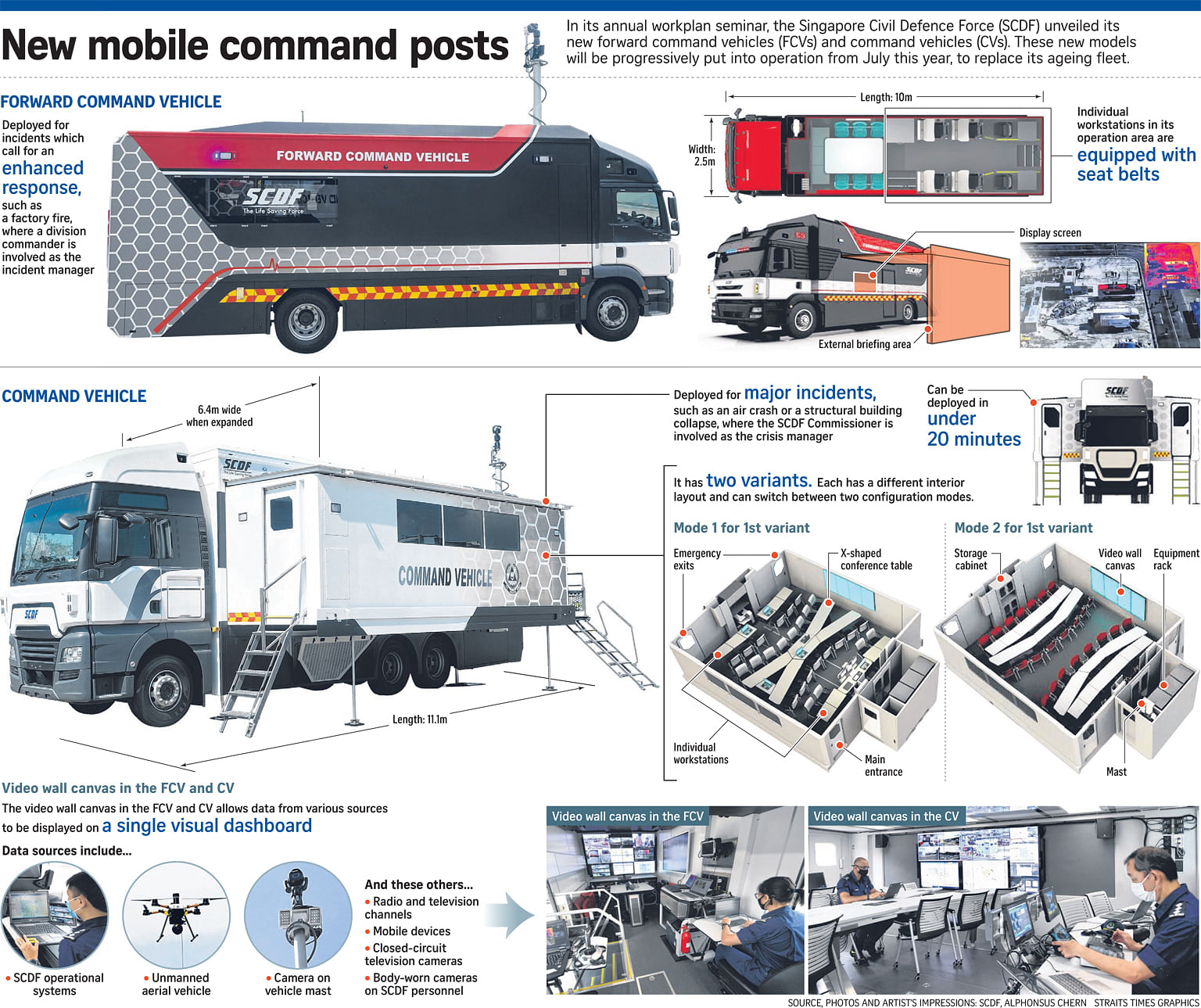 He also said that fire and rescue team members will wear a digitised breathing apparatus system that supports real-time monitoring of the wearer's physical condition, starting from next year.

"These improvements are part of SCDF's push towards a digitally enabled incident response that prioritises the safety of our personnel," he said.