SINGAPORE - The Singapore Civil Defence Force (SCDF) has ramped up its checks during the festive season to ensure that commercial premises adhere to fire safety rules.

It said in a press release early Saturday morning that an enforcement operation had been conducted on Friday, with SCDF officers inspecting shopping malls and public entertainment outlets at Clarke Quay, Jurong and Tampines.

Several fire safety violations were detected, including unauthorised change of use in parts of the premises, non-functioning exit lights, and obstruction to common passageways and exit doors.

"Such violations pose fire risks and would impede the safe evacuation of people during an emergency," it noted.

"SCDF takes fire safety violations seriously and will not hesitate to take tough enforcement actions against the offenders."

First-time offenders may be fined up to $5,000, while repeat offenders face a maximum fine of $10,000 and/or up to six months in jail.

Major offences such as the commencement of fire safety works without planned approval carry a fine of up to $200,000 and/or imprisonment for a term not exceeding 24 months.

Enforcement checks will continue throughout the festive season, SCDF added. 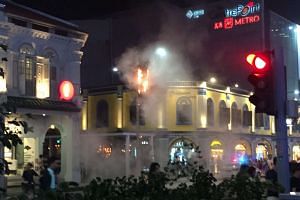 More inspections on festive decorations to be conducted, after second fire on Orchard Road

Meanwhile, the Orchard Road Business Association said on Friday that it was stepping up inspections of Christmas decorations on the popular shopping belt this month.

This comes after two fires occurred in eight days . A Christmas tree outside Knightsbridge mall went up in flames on Dec 2, while a piece of decoration tied to a street lamp outside Peranakan Place caught fire on Thursday night.