More than 400 participants were involved in a Singapore Civil Defence Force (SCDF) operational exercise at the Padang in the early hours of yesterday morning.

In total, 42 emergency vehicles were used in the exercise, which was to test the SCDF's response to a fire as well as a chemical agent release, the SCDF said in a Facebook update.

The SCDF shared photos which showed its officers arriving at the scene after some "spectators" in the stands had collapsed as a result of feeling unwell.

After officers confirmed the presence of a "chemical agent" and located its source, hazardous materials specialists wearing protective suits isolated and mitigated the chemical release.

Casualties were moved to a mass-decontamination vehicle, where they underwent decontamination to remove any trace of harmful chemicals from their bodies.

Earlier on Tuesday, the SCDF had advised the public not to be alarmed by the exercise.

All emergency vehicles participating in the exercise had their beacon lights switched on and signs were also placed near the Padang. 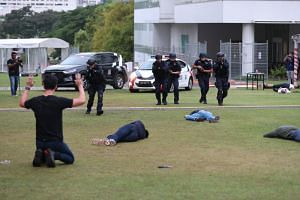 The Straits Times understands that the exercise, which began at 2am and ended by 4am, is related to the National Day Parade, which will be held at the Padang this year.

The SCDF said in its post: "These exercises are important as they allow SCDF to validate and update our operational plans and response procedures, including familiarising our emergency responders with the area of operations."

A version of this article appeared in the print edition of The Straits Times on July 25, 2019, with the headline 'SCDF conducts exercise at Padang ahead of NDP'. Subscribe
Topics:
More
Whatsapp Linkedin FB Messenger Telegram Reddit WeChat Pinterest Print Purchase Article Copy permalink