SINGAPORE - In a flash, Mr Mohamed Ferdaus Mohamed Yusoff bolted up a moving escalator in an MRT station to grab hold of a little boy hanging off its side.

The SBS Transit employee hauled him over the handrail, but lost his balance and fell on the steps of the moving escalator, hurting his knee.

He, however, held the boy tight as he hit the emergency stop button.

The six-second rescue drama that saved the boy from a 5m fall took place at Sixth Avenue MRT station on Tuesday (Sept 24) at about 6.40pm.

It was a "scene out of a movie", said an eyewitness.

On Thursday, Mr Ferdaus, 39, a senior assistant station manager who was still limping from the fall, recounted the incident to The Straits Times.

The boy, who looked to be about five years old, had entered the Downtown Line station with his mother, who was pushing a stroller with another child.

As the mother moved down the platform, the child, lagging behind, began to play with the handrail.

"I heard a loud commotion, turned and saw the boy hanging off the escalator with one arm and one leg dangling," said Mr Ferdaus.

"I immediately dropped my work pouch and bolted up the steps, following my instincts. I was just thinking to myself, 'Please let me reach him in time'."

Mr Ferdaus, who is 1.81m tall and does not consider himself athletic or sporty, sprinted up, taking two to three steps at a time, and reached the boy near the top in six seconds.

Typically, it takes about 20 seconds for a person standing still to reach the top.

Eyewitness Madam Tan, who is in her 50s, told the ST the incident took place just as she entered the station.

"The staff member was so heroic, everyone else just stood dumbfounded," she said, adding that he took a while to stand up and was limping as he moved.

Mr Ferdaus said the boy hardly uttered a word and hastily went down the steps to his tearful mother, who looked shaken.

She hugged the boy repeatedly before the family boarded a train and left, he added. 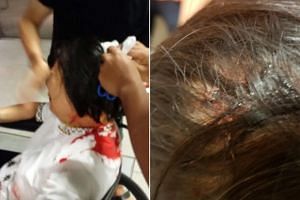 Mr Ferdaus was on medical leave the following day and returned to work on Thursday, walking with a slight limp. His knee is bruised and slightly swollen from the fall, he said.

He received a warm pat on the back from his employer.

"He had displayed great courage and selflessness and his swift action averted what could have been a very tragic accident. We will be commending him for his heroism."

Mr Ferdaus, who is married with a son, 19, and a daughter, 13, said: "I can understand how the mum must have been feeling in that moment.

"I was just doing what I can. If it is to save a life, like in this case, I will save a life."