Soldiers from the 5th Battalion, Singapore Infantry Regiment, and the United States Army combed through a forested area before fighting through an urban training area, with infantry carrier vehicles moving in to help with capturing the objective.

In the course of their assault at the Murai Urban Training Facility yesterday, the 300 or so troops spotted an improvised explosive device in a building. The area was cordoned off and explosive ordnance disposal experts were called in to defuse it.

It was the first time troops from the Singapore and US armies worked together to defuse improvised explosive devices as part of Exercise Tiger Balm, which is the longest-running exercise between the two armies.

The integrated team consisted of soldiers from the 36th Battalion Singapore Combat Engineers and the US Army's 303rd Explosive Ordnance Disposal Battalion.

This was the culmination of the brigade-level exercise, which began on July 8 and ends tomorrow.

The media was invited to observe the troops yesterday. 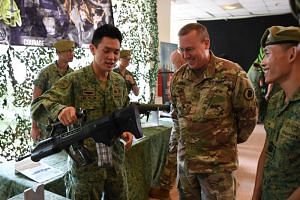 Commander of the 6th Singapore Division, Brigadier-General Lee Yi-Jin, said it is not common that two armies can operate so comfortably with each other at the various echelons.

"I think it takes a lot of trust and confidence in each other, whether you're planning together, the considerations that you share with each other. Even for the soldiers to go in to know that the guy next to him knows what he's doing, and will have his back as well," he told reporters yesterday.

His counterpart, Hawaii Army National Guard Chief of Staff, Colonel Stephen Logan, said that not only knowledge, expertise and skills have been shared, but lifelong friendships have also been built in the 39 years the exercise has been ongoing.

"I think the hardest part for the US forces would be when they board the plane and then go home, because of the friendships they've built," he added.

During the exercise, participating troops also exchanged knowledge on weapons, conducted small arms live firing and jungle survival training. In a statement yesterday, the Ministry of Defence said the annual exercise is the hallmark of excellent and longstanding ties between both armed forces.