SINGAPORE - The Singapore Armed Forces (SAF) must learn to use and exploit data more intelligently in order to stay ahead, Defence Minister Ng Eng Hen said on Thursday (Oct 4).

"In analogue terms, whichever military builds stronger capability in digital data exploitation will have the equivalent of greater firepower and manoeuvrability," he said, adding that its impact is "all pervasive".

He was giving the keynote address at the Ministry of Defence Productivity and Innovation in Daily Efforts (Pride) Symposium at Nanyang Polytechnic in Ang Mo Kio.

The annual event recognises the achievements and contributions of units and individuals in promoting a culture of organisational excellence, innovation and productivity in Mindef and the SAF.

A total of 67 awards were given in recognition of innovation and work improvement efforts that achieved savings of more than $158 million in the last financial year (2017).

Dr Ng said the momentum for this millennium's global industrial revolution has been "quite astonishing" based on digitisation and "datafication".

With increasing digitisation came increasing precision, he said, adding that the impact of precision is not only on artillery, but "the entire force structures of modern militaries are predicated on a digital battlefield". 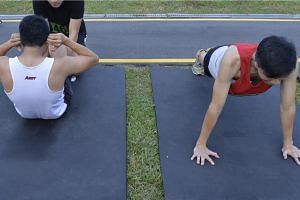 "If for any reason, the world reverts to analogue - complete power failure, no Wi-Fi, no data transmission - we would be at a disadvantage instantaneously," he said.

Giving an example of SAF efforts, Dr Ng said facial recognition will increasingly be used to screen both vehicles and personnel entering and leaving camps and bases.

Among the award winners were the army's Maintenance and Engineering Formation, and the Air Power Generation Command from the air force.

Both won the Minister for Defence Award, which is given to a unit or department in Mindef and the SAF for doing well in productivity and innovation, organisational excellence, resource optimisation and staff well-being.

Chief maintenance and engineering officer, Military Expert 7 Tan Mu Yen, said that his formation has embarked on a series of data analytics initiatives.

“For example, we are using telemetry data to conduct investigations into any malfunctions observed in our unmanned aerial vehicles, reducing the equipment downtime from 48 hours to about eight hours.”

Brigadier-General Gan Siow Huang, commander of APGC, said: “Innovation culture is very important for APGC, and for that matter, for the rest of the air force.

“We all know that the work force is going to become leaner in the future, and there will be more challenges ahead as the security environment continues to evolve, so we have to continue to find new ways to get our job done,” she added.

It helps to save cost by extending the shelf life of ammunition.

For instance, a fragmentation grenade’s lifespan could increase to 30 years, up from 10, by replacing the component of the grenade that expires first, rather than disposing of the entire grenade once it expires.

Another winning team from the air force came up with an alternative method to calibrate the navigation compass of the F-15SG aircraft.

This procedure, implemented last year, has led to a 50 per cent reduction in time needed to calibrate the compass. This innovation has been shared with the plane’s manufacturer, Boeing, and the United States Air Force.

Military Expert 4 Sebastian Zheng, 34, who led the project team, said: “Previously, it was quite tedious to have to tow the plane across the runway to use the calibration pad. Now, we can use the Global Positioning System within the aircraft itself.”