SINGAPORE - The Singapore Armed Forces (SAF) will be deploying a transport aircraft to Indonesia to support rehabilitation and reconstruction efforts following September's deadly earthquake in Sulawesi.

The Republic of Singapore Air Force (RSAF) C-130 aircraft is being deployed at the request of the Indonesian government to aid in efforts by the Indonesian Armed Forces (TNI), the Ministry of Defence (Mindef) said on Wednesday (Nov 21).

The aircraft will be deployed for a week to provide airlift support to transport humanitarian supplies into disaster-hit areas, Mindef said.

The aircraft and crew remained in Indonesia to support the TNI in relief efforts, such as ferrying humanitarian supplies for those who were displaced.

The SAF's contributions underscore the close and longstanding defence relationship between Singapore and Indonesia, Mindef said in the statement.

In a separate statement, Mindef said that the Singapore and Indonesia armies have successfully conducted the 30th edition of the flagship bilateral exercise, Exercise Safkar Indopura. 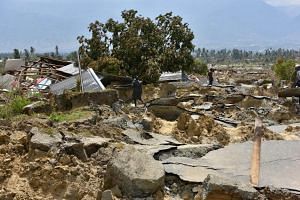 The eight-day exercise, which ended on Monday, was hosted by Indonesia this year.

Chief of Army Brigadier-General (BG) Goh Si Hou and Chief of Staff of the Indonesian Army General Mulyono co-officiated at the exercise's closing ceremony in Asembagus, Indonesia, on Monday.

BG Goh said at the closing ceremony that the exercise had achieved its objectives of raising professionalism, strengthening friendships and fostering mutual understanding between the two armies.

"Since its humble beginnings as a map planning exercise, Exercise Safkar Indopura has evolved to become a full-troop exercise with a battalion-level combined arms live-firing component," he said.

"Today, I am proud to say that Exercise Safkar Indopura is the largest bilateral exercise between the Indonesian Army and the Singapore Army. This is only possible because of the mutual trust and understanding that our armies have developed over the years."

In addition to bilateral exercises, the Singapore and Indonesia armies also engage in a range of bilateral activities, including visits, professional exchanges and courses.