SINGAPORE - Mr S R Nathan was one of the pioneers who built the foundations of Singapore, President Tony Tan Keng Yam said in a condolence letter to Mrs Urmila Nathan.

He recounted Mr Nathan's journey from a medical social worker in the 1950s to President of Singapore from 1999 to 2011 in his letter.

"Mr Nathan served with dedication and distinction each time he was called upon to take on leadership positions in various agencies and ministries," he said.

Recalling the Laju hostage crisis in 1974, Dr Tan said that Mr Nathan showed "utmost courage" in the handling of the crisis. 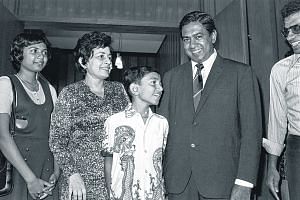 The former president, who was then director of the Security and Intelligence Division at the Ministry of Defence, was among a team who volunteered to take the place of some hostages and successfully negotiated with Palestinian and Japanese Red Army terrorists, he said.

After retiring from the civil service, Mr Nathan became the executive chairman of The Straits Times Press (1975), the predecessor of Singapore Press Holdings. He was later appointed Singapore's High Commissioner to Malaysia and Ambassador to the United States.

He also uplifted the Indian community as chairman of the Hindu Endowments Board and was a founding member of Sinda.

As president, Mr Nathan championed social causes such as the President's Challenge, which he initiated.

"I will always remember S R as a courageous, approachable and honourable gentleman who was deeply committed to Singapore," said Dr Tan.

"Whether as a steadfast diplomat or as a resolute advocate for social causes, S R's lifetime focus was always on how Singapore can be a better home for Singaporeans. His heart for the people of Singapore is an inspiration for me and for all Singaporeans."