Globalisation, free trade and economic integration - conceived and underwritten by the United States - have, since the end of World War II, brought peace and prosperity to everyone who subscribed to them.

But these factors have also led to the rise of a multipolar world, Minister for Foreign Affairs Vivian Balakrishnan said yesterday.

The question is whether the transition to a multipolar world can be managed peacefully.

Stressing the levels of US and Chinese investment in South-east Asia, the hope in the region is that "cool heads prevail" between the two countries, he said. "We hope there will be enlightened self-interest and a long-term perspective," he said.

The US had been part of South-east Asia's success story for 70 years, he stressed, because in its own enlightened self-interest, it had underwritten that order.

And Americans are welcome in South-east Asia, Dr Balakrishnan told the audience at the institute.

South-east Asia hopes the US and China have an "adult relationship" - not just competing, but also acting in enlightened long-term self-interest, while accepting Asean unity and centrality.

Rather than the alternative of Asean becoming a "bunch of proxy states", the hope is that a united Asean would be seen as valuable and a major trading partner for both the US and China.

"We hope all powers in our area will also operate by multilateral rules, and we will continue to have access to multilateral institutions and ways of resolving disputes."

Referring to President Donald Trump's speech on Tuesday in which he said the US embraced the doctrine of patriotism, Dr Balakrishnan said: "Everyone is a patriot; everyone has to look to one's own self-interest. But we believe in long-term enlightened self-interest."

He said this meant both competing and cooperating with neighbours, particularly on existential challenges, including climate change, the digital revolution and the next pandemic. "All these big challenges require multilateralism, cross-border cooperation, a set of rules by which we can all operate."

Citing the loss of public support for free trade between 2015 and late 2016 in America, and the apparent erosion of global consensus, Dr Balakrishnan said: "The real issue is technology, but it is very easy, it is very Twitter-worthy, to blame foreigners, to blame competition and free trade, for stagnation of wages and potential loss of jobs."

On the digital revolution, he said South-east Asia needs to train people for new jobs "because if you compete for old jobs, that is the route to middle-class stagnation, middle-class angst and increasing unemployment". 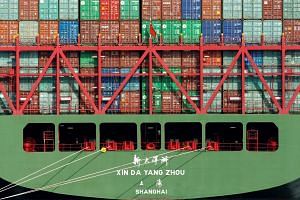 "There is a larger political message. Whenever the middle class feels stressed... you always see reactionary right-or left-wing extremes, whether it is fascism or communism," he said.

To cope with change, Dr Balakrishnan said, countries need to focus on research and development and collaboration, and use new tools such as artificial intelligence.

Dr Balakrishnan, who is in New York to attend the United Nations General Assembly, also met representatives of the Pacific Alliance, which comprises Chile, Colombia, Peru and Mexico. Singapore has been an observer in the alliance since 2014.

The minister also took part in the Global Cooperation and Artificial Intelligence Roundtable at the Bloomberg Global Business Forum, facilitated by former US secretary of state Henry Kissinger.