More small businesses may start bidding for government projects as long-standing rules are being changed to make it cheaper and easier for them to do so.

Companies with yearly revenues below $5 million no longer have to produce audited financial statements to take part in government tenders, Senior Minister of State for Trade and Industry Chee Hong Tat said yesterday.

This makes the process of bidding cheaper for small and medium-sized enterprises (SMEs), he said on the sidelines of a Singapore Business Federation (SBF) meeting.

This change got under way in June.

Come October, businesses will also not have to affix company stamps on government forms, including on tender-related documents submitted through government procurement portal GeBiz. This is unless the stamps are required by legislation.

Stamps were needed for identity verification, but the digitalisation of services has meant that other forms of checks such as digital platforms and signatures are available.

The change follows a review by the Ministry of Trade and Industry's (MTI) Pro-Enterprise Panel, which found that it is "cumbersome and time-consuming" for companies to download, print, physically stamp, then scan and send documents back to agencies via e-mail.

"Upon receiving the feedback, the Pro-Enterprise Panel worked with 28 regulatory agencies and got their agreement to do away with this requirement," said Mr Chee.

"When technology changes, we also have to change the way we regulate, and the rules that we have."

On whether the relaxation of rules on financial statements involved risks, Mr Chee said the risks were manageable. He said smaller companies tend to bid for lower-value contracts and will have to build up a good track record before bidding for bigger contracts.

The change is expected to benefit some 3,900 suppliers here, based on the number of registered suppliers who have participated in past government tenders. 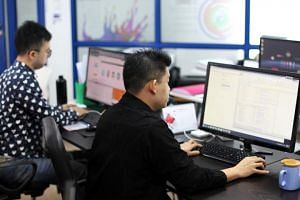 Only 14% of SMEs plan to go abroad: Survey

"It brings cost savings, and more importantly, I think it brings a lot more participation from SMEs in the procurement process or tender process as well," said Association of Small and Medium Enterprises president Kurt Wee.

Small enterprises support the move. Ms Marilyn Tan, director of furniture company Harvest Link International, said that this will save her company thousands of dollars in audit fees annually.

"Expenses are a factor, but it is also very cumbersome, and staff cost involved is high," Ms Tan said of the audit process. "It can take up to three or four weeks, and SME employees have many other roles to handle at the same time."

Yesterday, the SBF also announced that its SME Committee, to be chaired by Mr Wee, will extend advocacy efforts beyond the Government to businesses and the workforce.