This means the start of cross-border MRT services - which were intended to ease congestion at land checkpoints - will likely be delayed beyond the original target date of Dec 31, 2024, he said.

He was responding in a written parliamentary reply to Mr Ang Wei Neng (Jurong GRC), who had asked for a progress update on the RTS.

Mr Khaw, who is also Coordinating Minister for Infrastructure, said several milestones set out in the legally binding RTS Link bilateral agreement inked in January last year have been missed.

A joint venture comprising Singapore's SMRT and Malaysia's Prasarana Malaysia Berhad should have been formed by June 30 last year. It should then have been appointed as the RTS Link operator through a concession agreement with Singapore's Land Transport Authority (LTA) and the Malaysian government by last September.

But over the past few months, Malaysia has indicated that it is considering replacing its joint venture partner, Mr Khaw said. It has, however, delayed confirming this partner - first until September last year, then December. On Dec 28, it requested to be given until Feb 28 this year to do so. "As a result of these delays, the joint venture company has not even been incorporated to date, let alone signed the concession agreement," Mr Khaw said. 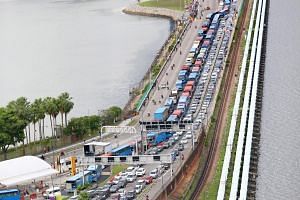 Malaysia to continue with JB-S'pore RTS link but looking at ways to reduce costs: Transport Minister

Under the bilateral agreement, both countries are obliged to jointly call a fair, international and transparent open tender to appoint an operating company if this has not been done by the original deadlines, or if the joint venture company has not been incorporated - unless both governments mutually agree to postpone these deadlines.

In November, Singapore sent draft tender documents to Malaysia, but has not received a response. This means there is a "real risk" that both countries will not be ready to call a joint open tender by March 31, Mr Khaw said.

Missing this deadline may in turn lead to the appointed operating company being unable to procure the Thomson-East Coast Line core systems for the RTS before these procurement options expire, he added.

Mr Khaw noted that the LTA has assembled nearly 70 staff to implement the RTS. Civil tenders have also been called, including to build Singapore's RTS Link Woodlands North station and its portion of the RTS Link crossing bridge.

He added that Singapore has been reasonable and flexible "because we understand Malaysia's circumstances following the May 2018 Malaysian general elections". But there are "serious implications" to missing the agreed deadlines and thereafter failing to engage with Singapore to work on jointly calling an open tender to appoint the operating company.

The RTS bilateral agreement, he said, is a binding international treaty regardless of changes to governments, and makes clear each country's responsibilities and the consequences of not meeting them.

Mr Khaw also said that Singapore will continue to take a "constructive approach" to move the project forward, and remains fully committed to implementing it.