SINGAPORE - Drastic weather changes in the Nevada desert were among the challenges that Military Expert 1 Joanne Lee, a Republic of Singapore Air Force (RSAF) engineer, had to battle in her first large-scale international air combat exercise.

Over the last two weeks, about 100 RSAF personnel participated in realistic training scenarios in the United States, involving more than 80 aircraft from seven countries.

As an Air Force engineer, ME1 Lee's role was to ensure that the RSAF's six F-15SG fighter aircraft were mission-ready, whatever the environment.

The efforts of team helped the RSAF to clinch the Outstanding Aircraft Maintenance Unit award at this year's Exercise Red Flag-Nellis, which ended at Nellis Air Force Base in Nevada on Saturday (March 23).

Singapore's representatives were from the Peace Carvin V detachment, which is based in the Mountain Home Air Force Base in Idaho.

Belgium, the Netherlands, Norway, Saudi Arabia and United Arab Emirates were the other countries that participated in the exercise hosted by the United States Air Force (USAF).

The exercise, which the RSAF has been taking part in since 1982, "underscores the excellent and long-standing defence relationship between Singapore and the US" and provides the RSAF with an opportunity to benchmark itself against other leading air forces, Mindef said. 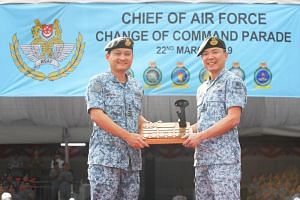 It was an "exciting and an eye-opening experience" for ME1 Lee, 26. Despite some nerves, things went off without a hitch, thanks in part to a "strong operations-logistics relationship between the air crew and ground crew", she said.

"Having a dedicated adversarial force, which employed advanced tactics and electronic warfare, made the training more realistic," he said.

The Commanding Officer of the USAF's 64th Aggressor Squadron, Lieutenant Colonel Zachary Manning, was one of the pilots who flew against the RSAF's F-15SG during the training missions.

He said: "The RSAF has performed fantastically during this year's exercise. They have executed tactics on par with the other leading air forces, and have hit all the targets that they have been assigned."