190 pilots have trained in Cazaux since 1998, and 191 babies have been born to staff there

Trainee fighter pilots from Singapore are not the only ones who have taken to the skies at Cazaux in the last two decades - the stork has also been soaring there.

Since the Republic of Singapore Air Force (RSAF) set up a training detachment in the south-western French town in 1998, more than 190 pilots have trained there. At the same time, 191 babies have also been born to staff and their families based in Cazaux.

"So for every one pilot, one baby. That's not a bad ratio," said Defence Minister Ng Eng Hen yesterday at an event to commemorate the 20th anniversary of the RSAF's Cazaux detachment.

To mark the milestone, an RSAF M-346 aircraft and a pair of French Air Force (FAF) Alpha Jets performed a combined flypast in front of delegates from both countries.

Dr Ng is also in France for the French national day parade in Paris on Saturday, and will join Prime Minister Lee Hsien Loong, who will attend as a guest of honour.

Expressing his gratitude to the French government, its armed forces and people for giving the RSAF the opportunity to train in Cazaux, Dr Ng said France has played a "crucial role in helping Singapore train pilots to defend Singapore and our airspace".

The large airspace in Cazaux - 32 times the size of Singapore - offers the RSAF pilots sprawling skies to hone their skills. And training alongside their French counterparts "allows the RSAF to learn from and peg itself against a world-class air force", Dr Ng added. 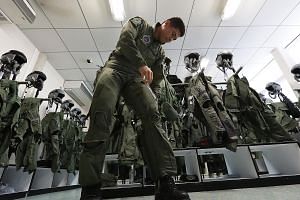 RSAF to join French jets in flypast on Bastille Day

"The RSAF's presence in Cazaux is a physical testament to the strong and growing ties between our two countries. It is developed on a shared foundation of ideals and values for both our countries, built on liberty, equality and fraternity."

Cazaux Air Base, about 60km from the city of Bordeaux, is home to 150 Squadron and where fighter aircrew undergo the Advanced Jet training programme. Pilots fly the M-346, a stepping stone before they operate sophisticated warplanes like the F-15SG and the F-16.

Dr Ng was accompanied by Chief of Air Force Mervyn Tan on his visit. The French delegation included Secretary of State to the Minister for the Armed Forces Genevieve Darrieussecq and FAF's General Officer Commanding the South West Defence and Security Zone and Air Forces Commander, Lieutenant-General Jean Rondel. In 2011, Singapore and France agreed to extend the Cazaux detachment to 2035.

Asked how both countries will further their military cooperation, Dr Ng said there is also collaboration in areas such as defence technology and cyber security.

Of the many babies born in Cazaux, Dr Ng quipped: "Somehow I think the air, the Arcachon oysters, the French wine make for very fertile ground for babies."