SINGAPORE - Owen Tan is only six but already dreaming of soaring through the skies for the Republic of Singapore Air Force (RSAF) when he grows up.

The Primary One pupil was one of the visitors at the RSAF50@Heartlands celebrations which kicked off at the HDB Hub in Toa Payoh on Saturday (March 10).

"When I grow up I want to fly an Apache helicopter as it's so powerful," he said.

A total of 50,000 people are expected to turn up at the HDB Hub in Toa Payoh over Saturday and Sunday to celebrate RSAF's golden jubilee. After this, the celebrations will move on to Sembawang, Punggol, Bedok and Jurong East.

At the event, visitors will get to interact with RSAF airmen and women, as well as learn more about the force's capabilities through static displays of aircraft and weapon systems.

They can also contribute to the RSAF50 Mural by taking photos at specialised photo-taking booths featuring different animated backgrounds. Visitors also have a chance to don RSAF uniforms to have their photos taken.

The RSAF's history goes back to September 1968 when it was started as the Singapore Air Defence Command. It had only two Cessna aircraft for basic flight training then.

It was formally inaugurated as the RSAF on April 1, 1975.

The air force's golden jubilee celebrations had kicked off earlier at the Singapore Airshow on Feb 7, when three F-15SG fighter jets soared through the sky in a flypast over Changi .

Deputy chairman of the RSAF50@Heartlands organising committee Colonel Ho Yung Peng said: "We want to reach out to as many Singaporeans as possible. For the airshow, there was a huge attendance but there are many people who have not seen the exhibits at the airshow." 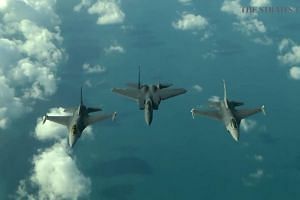 Other commemorative events lined up this year include a flypast over Marina Barrage featuring all types of RSAF aircraft, during the National Day weekend.

The celebration will culminate in the RSAF50 Parade on Sept 1, to be attended by Prime Minister Lee Hsien Loong.

Each two-day exhibition will be held from 10am to 9pm.