ROCKHAMPTON, AUSTRALIA - Choppy seas have delayed plans for a ship-to-shore military exercise in which Singaporean and Australian troops are meant to storm a beach.

Waves up to two metres high at the Shoalwater Bay Training Area in Queensland, Australia, were outside the safety limits for the navy's fast craft to carry personnel and vehicles to shore.

However, the fact that the manoeuvre could not take place was "not a showstopper", and Exercise Trident will go on, Senior Minister of State for Defence Heng Chee How vowed on Saturday (Nov 10).

The battalion-level amphibious operation is meant to be the culmination of Exercise Trident, a signature bilateral exercise between the two countries taking place from Oct 31 to Nov 14.

Troops will continue the operation when sea conditions improve.

An advance party transferred by helicopter to land was witnessed by Mr Heng and Australian Assistant Minister for Defence David Fawcett.

Speaking to reporters on the landing ship tank RSS Resolution, where the air force's choppers took off from, Mr Heng said: "It's the nature of military operations, you have got to adapt to the environment, including the weather and the sea state. But really what it means is that we will find different ways to attain our operational objectives.

"The fact that we are not able to do this particular tactical manoeuvre today is not a showstopper, (we have) an all-weather partnership that has gone on for years; we have been at Shoalwater Bay for 28 years, and we will continue to be here to expand our collaboration."

He added that the exercise demonstrates the closeness of defence relations - something that has "gone back decades and will grow stronger in the days ahead".

Mr Heng added that there is great value in training in Australia. 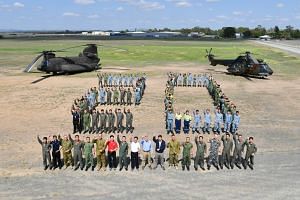 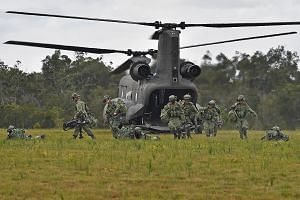 "(I think it shows) Singapore is able to overcome the physical constraints that we face in order for our armed forces to be able to learn to fight in a very integrated way, thereby increasing our effectiveness," he said.

This year's Exercise Trident features the largest contingent of Australian troops since the exercise was launched in 2013.

More than 100 Australian Defence Force soldiers took part this year as part of more than 1,300 personnel from both sides.

The exercise is the third phase of Exercise Wallaby, the Singapore Armed Forces' (SAF's) largest overseas exercise which began in September.

Under the memorandum of understanding on Military Training and Training Area Development signed in 2016, the Singapore Armed Forces (SAF) will be able to conduct training in Australia for 18 weeks a year with 14,000 troops.

Under the 25-year, A$2.25 billion (S$2.24 billion) deal, training will be held in the Shoalwater Bay and Townsville training areas which, combined, are 10 times the size of Singapore.

Mr Fawcett said that the Comprehensive Strategic Partnership is a "good bedrock" for bilateral training.

He said that Singapore's investment in Townsville shows how the deal not only benefits Singapore, but also helps to build infrastructure and industrial capability in Australia.

Supporting assets in Exercise Trident from the Singapore navy and air force include Chinook and Super Puma helicopters, as well as RSS Resolution.

Colonel Xu You Feng, frame commander for Exercise Trident, said the value of the exercise allows integrated tri-service training in a scale and complexity that would not have been possible in Singapore because of space constraints.

Col Xu, who is also commander of the 7th Singapore Infantry Brigade, added that it was also important to enhance interoperability and relationships among soldiers from the two countries.

"This is particularly important because we often find ourselves operating with soldiers from Australia in our overseas deployments," he said.

"On a personal level, our soldiers even taught them a bit of Singlish," he said.

He added that going through the rehearsals in the past few days has made his men more versatile and confident.

His counterpart, Major Pat D'arcy, 30, an officer commanding of the Alpha Company of the 8th/9th Battalion of the Royal Australian Regiment, said the way the SAF first sends a team to mark the beach landing site and the path ahead is something they have learnt from Singapore troops during rehearsals.

"That is something we don't do and could potentially implement in our own standard operating procedures," he said.