Everyone knows the familiar strains of Majulah Singapura when the national anthem is played during the National Day Parade (NDP).

But those who attended this year's five preview shows would not have expected the live rendition by local rock icon Ramli Sarip in the show's sixth act.

The singer's gritty and soulful vocals prompted Defence Minister Ng Eng Hen to share a video of his performance on Facebook on Aug 1.

"It's soul-stirring to hear, even moving some in the audience during the rehearsals to tears," wrote Dr Ng.

The song has also stirred debate, with many sharing Dr Ng's opinion but others less impressed.

However, most people gave Ramli the thumbs-up, with user Lau KS commenting that it "should be the way to sing our national anthem, with feeling and emphasising the important words at the right time".

Another user Cheng Heng Joon wrote that Ramli's final "Singapura" note sounded like "a heartfelt plea to bygone years when life was simpler and happier".

He was not far off the mark. 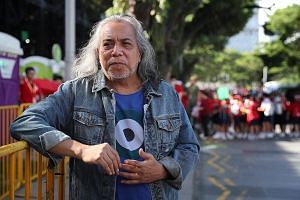 Dignity, passion in Ramli Sarip's take on the national anthem

Ramli, 66, told The Straits Times that he thinks about Singapore's past, present and future when taking up the mic to sing.

"I've been singing Majulah Singapura since I was seven years old and it's been kind of a spiritual journey with the song," he said.

"At first, you know, you just sing because you're supposed to sing. But now, it's something very special for me as a Singaporean. It's a golden moment."

This year is a personally significant one for the man dubbed "Papa Rock" too as it marks the 50th year of his music career.

The idea to have Ramli sing the national anthem came during a recording session for this year's National Day song, Our Singapore.

He was one of 27 artists who lent their voices to the song, alongside fellow singers JJ Lin, Kit Chan and Taufik Batisah.

NDP 2019 music director Sydney Tan was seated at the acoustic piano in the studio and, on the spur of the moment, Ramli asked him if the artists could do their own take on the national anthem.

"He said yes, we tried it and the vibes were very different. The feel was very folk," the singer said.

His fresh take also appears to have gone down well with younger Singaporeans less familiar with his songs but who sing the national anthem at school assembly every day.

"I was confused at first as I had not heard the song sung this way before. But it was creative and I liked it," he said.

His classmate Ikhwan Faqif, 13, who attended the show with him, said: "I didn't like the part where he sang the words 'Majulah Singapura' but overall, it was very nice and heartwarming to hear him sing."