There were 31 robbery cases last year, compared with just seven in 2018

The number of robbery incidents against ships in the Singapore Strait increased to 31 last year, compared with seven in 2018.

Most of the incidents last year took place in the hours of darkness and resulted in no or minor injuries to ship crew.

In most of the cases, the weapons carried by the perpetrators were not specified in reports. In other cases, robbers were unarmed, carrying knives or machetes or, in one case, a gun and a jungle knife.

The number of armed robbery and piracy cases in Asia last year also increased. There were 82 reported incidents last year, compared with 76 in 2018, which was the lowest since 2007.

These statistics were released by the Regional Cooperation Agreement on Combating Piracy and Armed Robbery against Ships in Asia (ReCAAP) Information Sharing Centre yesterday .

Under the United Nations Convention on the Law of the Sea (Unclos), "piracy" is defined as any act of violence or detention committed for private ends in a place outside the jurisdiction of any state, while "armed robberies" take place in a state's internal waters.

Mr Masafumi Kuroki, executive director of the Singapore-based centre, said the number of incidents last year was a significant increase, although it was not as high as the 99 incidents in 2015.

"It is important for littoral states in the area to enhance their surveillance and control in the Singapore Strait, as well as for the shipping industry to step up its vigilance," he said, adding that one possible measure was having more crew to keep watch at night for suspicious small boats that approach.

The littoral states which manage the Singapore Strait are Singapore, Indonesia and Malaysia. 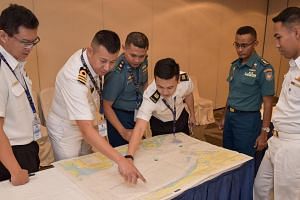 Mr Kuroki said it was difficult to identify whose territorial waters the Singapore Strait incidents took place in, when asked about this.

"This is especially as the ships are moving from the waters of one state to another. This is why information sharing between the states is important."

ReCAAP has been keeping records since 2007. Other types of incidents include the abduction of crew, which is more common in the Sulu-Celebes Seas and waters off eastern Sabah.

In a Facebook post yesterday, Transport Minister Khaw Boon Wan said he and Mr Kuroki discussed possible cooperation initiatives with regional players over lunch. He wrote that recent sea robbery incidents near Singapore were "troublesome" and ensuring maritime safety was a priority for all states involved.

Having such an arrangement among the countries means that a law enforcement agency can chase suspects into other countries' territorial waters.

Mr Ridzwan, who was at yesterday's briefing, said: "However, it might be difficult to implement such procedures due to historical sensitivities regarding maritime boundaries."