The annual Hari Raya bazaar in Geylang Serai has drawn huge crowds in recent years, but stall owners say they have had to pay a price for the bustling event.

They say rental costs have jumped by at least 10 per cent to 20 per cent from last year, and some even claimed to be paying more than double the rate.

The Straits Times interviewed 13 hawkers at the bazaar, which officially opened last Thursday - the first day of the Muslim holy month of Ramadan - and runs until June 14.

The bazaar features more than 800 stalls which sell food, cookies, traditional clothing, jewellery, rugs and many other items.

Owner of EnNiche Events, one of the operators appointed by organiser Kampong Ubi CC, Mr Mohamed Mustaffa Shah Jehan, 34, attributed the rising rentals to the increasing bids during the tender for the bazaar. He noted that it totalled almost $3 million this year, and said he hoped the bazaar organisers would set a cap on such bids in the future.

There are usually several organisers for this event. Each will put out a tender to appoint bazaar operators, who then engage tenants for stalls in areas within their purview.

At least one stall owner appears to have decided that he will not accept any more rental increases.

Mr Mahendra Sakkaravarthi, 31, of Mr Vadai, an Indian food stall selling local delights such as prawn vadai and briyani, indicated that he could drop out next year, bringing his family's 30-year participation in the bazaar to an end. 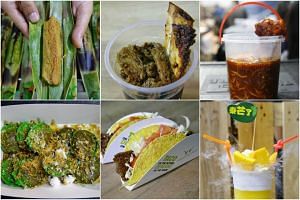 Break fast with a feast: Good eats at the Hari Raya Bazaar 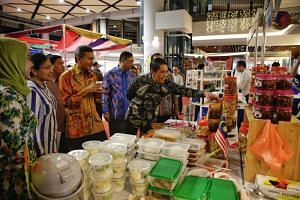 He said: "I was shocked when I found out that rental had increased again. This excludes the cost of water, electricity and manpower."

The cost of water is $500 per sink, while electricity supply costs between $500 and $1,000 for most stalls. Mr Sakkaravarthi also pays each of his four workers $100 a day to man his stall. He claimed that most of his profit from last year went to paying rental and maintenance costs.

Drink stall owner Fadzlon Mohammad, 26, said some previous tenants had been put off by the rental hikes: "Last year, the layout was very compact. But this year, there are gaps between the stalls because of fewer tenants."

But the Geylang Serai Citizens' Consultative Committee (CCC) and Wisma Geylang Serai, one of the organisers of this year's bazaar, attributed the decrease in the number of stalls to competition from other mega bazaars across the island.

Many hawkers, however, remain optimistic about sales this year.

"Sales have been good so far. I think we will be able to cover the rent about midway through the bazaar period," said Mr Rishi Kesan, 33, co-founder of a new venture, Chef Syed X Meatballs in a Bucket.

Senior Minister of State for Defence and Foreign Affairs Maliki Osman, who hosted the official opening of the Asean Street Fair at the bazaar last Thursday, said that he was aware of concerns about rising rental costs at the bazaar.

"We will work with the other operators of the different bazaars in the area and hopefully in the years to come, we will be able to manage some of these challenges (like rising rentals)," said Dr Maliki, who is also Mayor of South East District, which includes Geylang Serai.