SINGAPORE - The revamped Funan mall and office complex will open months ahead of schedule by the second quarter of next year and use facial recognition technology to offer shoppers recommendations.

The launch of its co-living serviced residence component lyf Funan, managed by The Ascott, will meanwhile be brought forward from 2020 to the fourth quarter of next year.

These were announced by owner CapitaLand Mall Trust on Friday (Sept 28) at a ceremony to mark Funan's structural completion.

Finance Minister Heng Swee Keat said at the event that the new Funan mall will be Singapore's first "online and offline mall", powered by an ecosystem of sensors, data analytics and facial recognition tools to better understand consumer shopping habits and preferences.

Funan mall will be the first here to use technology such as a smart directory that uses facial recognition to provide shoppers with customised recommendations, said CapitaLand.

The mall will have a touch screen directory, equipped with a camera, that can scan the faces of shoppers to sort them into general profiles such as young female and senior male, and recommend stores that target that demographic.

The facial recognition function of these directories, which will also be rolled out to other CapitaLand malls, does not capture or store personal data, CapitaLand Retail's chief executive Wilson Tan told The Straits Times on Friday. 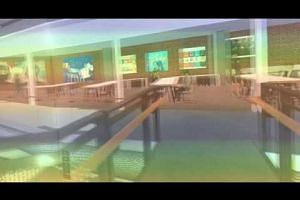 New Funan to focus on fun and creativity

The new six-storey Funan mall will also utilise video analytics to study shopper traffic and crowd density, which will help CapitaLand to adjust tenant mix and placement. Shoppers will also be able to search for their car in the carpark using a video system that can scan licence plates.

The former Funan DigitaLife Mall in North Bridge Road, which closed in July 2016, has been undergoing a $560 million transformation into an integrated development centred on lifestyle, technology, and the arts.

About 70 per cent of Funan's retail space has already been leased to tenants such as Golden Village, FairPrice Finest and theatre company Wild Rice.

New tenants announced on Friday include foldable bike brand Brompton Bicycle, which will be opening its flagship Singapore store, a farm-to-table restaurant concept by Spa Esprit Group and gaming store GamePro, which will host eSports tournaments in a dedicated eSports zone in the mall.

"We are taking a close examination of our retail portfolio in Singapore and abroad to identify areas for reinvention," he said.

Elaborating on the use of facial recognition technology, Mr Tan said some may choose to have their faces scanned to receive personal recommendations.

For instance, CapitaStar loyalty programme members who provide consent may in the future have their faces scanned to receive personal recommendations based on their purchase history.

"The idea is that a retailer has a digital screen or wall that can recognise I am a CapitaStar member and have been a previous customer of that store, and the screen will be customised for me," said Mr Tan, who added that facial recognition technology may also be used for entry at Funan's office complex as well as lyf Funan.

Other plans for the CapitaStar programme, which has about 920,000 members, include having data captured from receipts provided to members as insights into their spending patterns, he said.