SINGAPORE - With the restaurant industry battered and bruised by the Covid-19 pandemic, owners and chefs greeted the newest regulation on reopening with a mix of relief and resignation.

From Monday (June 21) restaurants can open for dine-in customers, with no more than two of them at one table.

Hardest hit will be Chinese restaurants, where dishes are mostly for sharing.

Chef Edward Chong of Peach Blossoms, a Chinese restaurant at the Parkroyal Collection Marina Bay, said he received cancellations from diners with bookings for four or five people right after the announcement.

Mr Shek Chi Kuen, general manager of Yan at the National Gallery Singapore, said staff have been contacting diners with bookings for more than two to see if they are from the same family, and can split up.

"While some families have agreed to split tables, the majority have decided to cancel for now," he said. "We are thankful we are able to at least open to welcome back diners.

"Our dishes are mainly communal style for sharing. However, we are able to portion out the dishes to families in the same household seated across multiple tables. We also have set menus which are individual courses."

Mr Robert Chua, owner of Kam's Roast and Kam's Roast Express, said the two-per-table regulation is "a good step for things to progress".

He said: "This would mean that there will be traffic in the malls and restaurants. We offer meals suitable for one or two diners, and are hopeful that customers will return."

"Hawker food, other than zi char, will be less affected."

The Restaurant Association of Singapore (RAS), which represents more than 400 restaurants, caterers, fast-food chains and foodcourts in Singapore, said: “RAS is happy that there will be a gradual return of dine-in with a two-pax limit from June 21 until mid-July. Together with the extension of 50 per cent support under the Jobs Support Scheme for F&B (food and beverage) businesses for another three weeks, this move to allow limited dine-in will hopefully provide some much-needed business relief for many of our F&B operators.

“To further ensure the safety of both our crew and customers, we will be working closely with the authorities and our members and other fellow F&B operators, to put in place the necessary safe management measures, including a self-administered Fast and Easy Test process.

“We hope that with these additional measures, the number of new cases can be reduced and the spread curve flattened, to allow us to welcome a larger group of dine-in customers, hopefully in a month’s time.”

Mr Ignatius Chan, owner of one-Michelin-starred Iggy's at the Hilton Singapore, said: "It's going to be like Valentine's Day."

He was referring to how restaurants are full of tables for two on Feb 14. The restaurant, like many others, will continue to offer takeaway food, since most of its guests make bookings for four or five people.

Like many in the industry, chef Jason Tan of Restaurant Euphoria in Tras Street is glad he can open his fine-dining restaurant.

"We should be thankful," he said.

Chef Mano Thevar, of Thevar, a contemporary Indian restaurant in Keong Saik Road, said: "I think it's good that the Government is considering the people's needs. We get to reopen our restaurants and guests get to experience 'normalcy' again.

"Slowly but surely, we'll get there again. It's a fight we are all battling together."

Chef Dylan Ong, owner of The Masses, a casual Franco-Asian restaurant in Beach Road, said: "Two pax? I'm sure we are all very happy to work with that. As long as it helps with survival."

Also looking at the bottom line is Mr Eugene Goh, co-owner of Rebel Rebel, a natural wine bar and restaurant in Bukit Pasoh.

He said: "Even though it's only parties of two, it will still be a huge help to our bottom line."

Mr Ian Lim,co-owner of Wine RVLT, a wine bar in Carpenter Street, is disappointed that restaurants will not be able to play recorded music.

He said: "With no music, it really defeats the purpose of dining out. We're a wine bar. With no vibe, it's better to just eat at home."

Cautious reopening will give S'pore time to get more vaccinated: Covid-19 task force

Ms Karen Cheng, co-founder of The Gyu Bar, a beef-centric restaurant in Stevens Road, said: "While we appreciate the calibrated opening, we are a little disappointed that recorded background music isn't allowed. We understand the reason for this rule, but light ambient music is one of the components that adds value to the dining experience in restaurants."

Mr Aidan Wee, co-owner of Fleurette, a fine-dining restaurant in Rangoon Road, said: "We understand the situation is fluid, but the new rules are announced without giving the industry time to react. This leads to wasted ingredients or cancelled reservations that cost us thousands of dollars.

"The two-pax dining rule is better than a total ban on dining out, but it only serves to slow the bleeding rather than stop it."

Fund manager Julian Lim, 45, who eats out often, said: "I'm disappointed by this two-person rule but I'm frankly more worried about the F&B folks. This continued uncertainty will definitely put further stress on them. Massive orders for ingredients in anticipation of restaurants reopening to parties of up to five will now see such ingredients wasted.

"I will obviously need to rejig my reservations but I'm worried for the F&B warriors all around. I just hope they all survive." 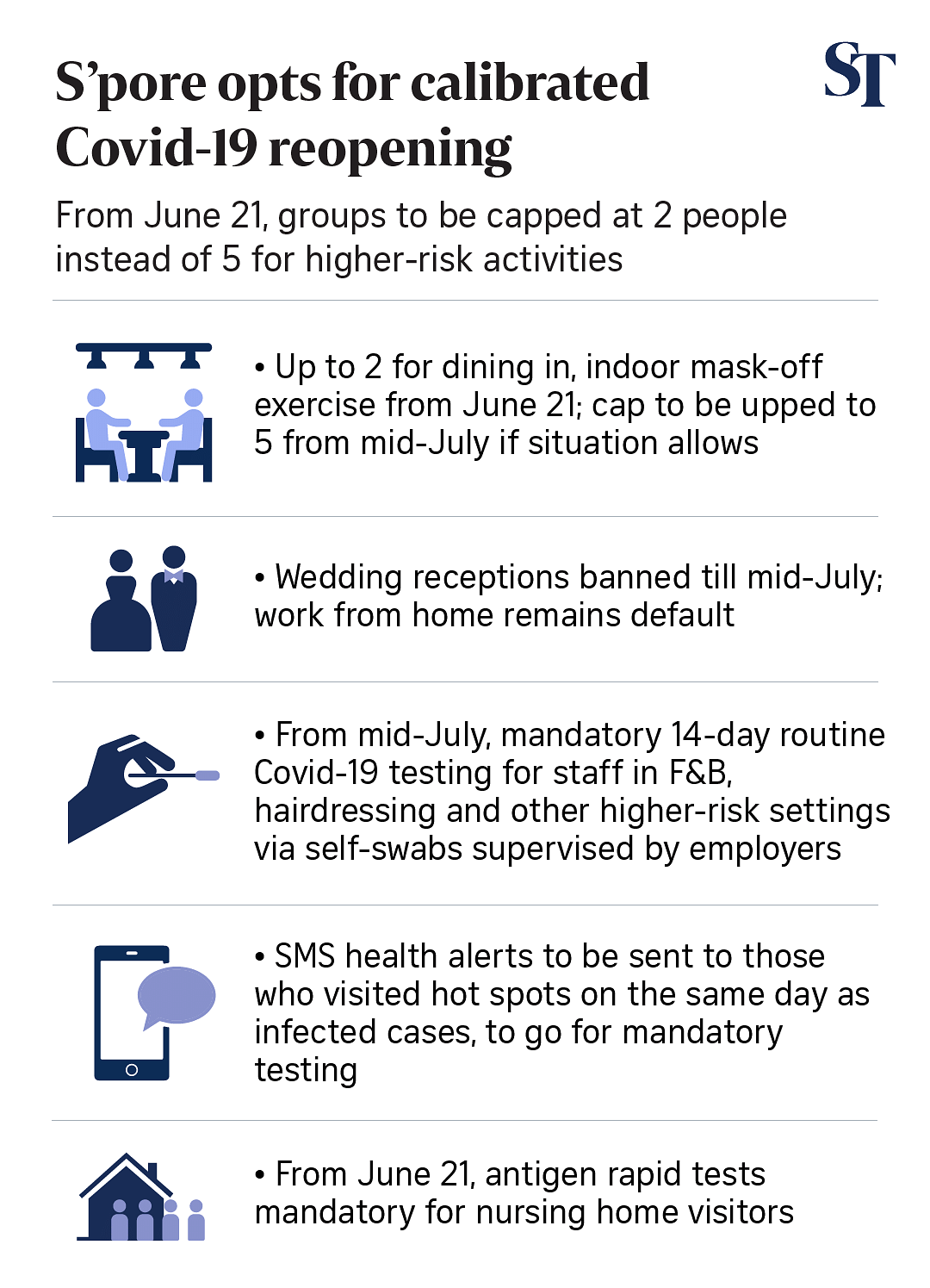