He turned out to have dengue and was referred to Changi General Hospital, where he has been warded since last Thursday.

His colleague, Mr Long Tiang Teck, 90, who works in a furniture shop in Chai Chee Road, told The Straits Times yesterday that he suspects Mr Tan got bitten by the Aedes mosquito while tending to his plants.

Asked if he takes measures to prevent mosquitoes from breeding, Mr Long said: "I clear the water, make sure there are no puddles collecting anywhere and don't keep any plants. I am quite old; it is hard for me to do much."

At the other end of the age spectrum, nine-year-old Sai Pramud nodded confidently when asked if he knew his block in Woodlands Drive 62 was in a dengue cluster.

He said he was vigilant about mosquito prevention at home: He frequently sprays insect repellent, checks his family's plants for stagnant water and changes the water in the fish tank once a week.

Such awareness of dengue and precautionary measures against it are what may be key to stemming the current dengue epidemic. The elderly men's Chai Chee neighbourhood is the fourth-largest dengue cluster on the island.

They are less mobile, which means it is harder for them to clean their houses, especially if they live alone. These elderly folk are more vulnerable because they are physically weaker too.

A RETIRED ENGLISH SCHOOLTEACHER, who said the dengue outbreak made her concerned for her Geylang neighbourhood.

The two largest clusters are in Woodlands, with the third located in Geylang.

More than 5,500 people have been infected with the mosquito-borne virus this year, of whom about 2,000 people have needed hospital care. Five have died.

ST spoke to 40 residents in these four clusters yesterday and found that many were aware their area was in the midst of a dengue outbreak.

Dengue fever is spread by Aedes mosquitoes, which are identifiable by black and white stripes on their bodies, and breed in bodies of stagnant water as small as a 20-cent coin.

The proportion of mosquito breeding habitats detected by the National Environment Agency (NEA) in homes was 74 per cent on average in dengue clusters, and 60 per cent on average nationwide. NEA says bodies of stagnant water in and around the home should be frequently removed to prevent the spread of dengue.

More than half of the residents interviewed in the top four clusters were aware of the epidemic.

In particular, experts have raised concerns about the disease among patients over 65, who tend to suffer more, yet typically do not display the usual dengue symptoms.

Some residents were especially concerned about young children being affected. When his toddler came down with a fever in February this year, Mr Sofian, 34, who did not wish to give his full name, feared it might be dengue. 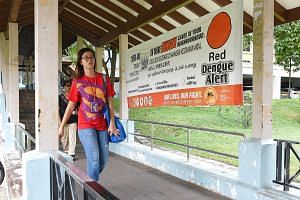 Anti-dengue efforts stepped up in Woodlands

His wife alerted the town council, and soon fogging was done around their block.

Their daughter was fortunately not diagnosed with dengue.

But age is no barrier for the Aedes mosquito. Student Alicia Tung, 16, recalled her mother's battle with dengue last month. After coming down with a high fever that lasted several days, her mother was diagnosed with dengue at Khoo Teck Puat Hospital, where she was warded for four days.

The family searched for potential mosquito breeding sites around their block in Woodlands Drive 72, finally spotting "a pool of stagnant water that was so dirty it was black" on the corridor ledge of the floor above their apartment.

The ledge was also chipped and had paint peeling off, allowing water to collect. They immediately called the town council, which sent workers down to remove the water and repair the ledge.

Other residents shared incidents of neighbours throwing styrofoam boxes, beer cans and other water receptacles in the common corridor.

Retiree Ng Koon Lim, 77, who lives on the 10th floor of a block in Chai Chee Road, said the dry riser near the lift has been filled with rubbish for months. "I have spoken to the town council before and sometimes they do send people down to remove the rubbish. But after some time, it happens again. They told me it is done by someone of unsound mind and to let the matter rest," he said.

He added: "But the area already has a dengue situation and the things thrown here can collect water, which makes it extremely worrying, especially since most of the people who live here are old."

A retired English schoolteacher said the outbreak made her concerned for her Geylang neighbourhood, especially its elderly residents: "They are less mobile, which means it is harder for them to clean their houses, especially if they live alone. These elderly folk are more vulnerable because they are physically weaker too."

She suggested the nearby Geylang East Public Library hold programmes for children and parents to raise awareness of dengue.

"Everyone needs to work together to protect the community," she said.