SINGAPORE - The researcher who came up with the first nationwide count of the homeless here has drawn up a host of recommendations to better tackle the issue.

Assistant Professor Ng Kok Hoe from the Lee Kuan Yew School of Public Policy at the National University of Singapore said that the design and funding of shelter services has to be commensurate with the complexity of the underlying causes of homelessness.

A Ministry of Social and Family Development (MSF) spokesman told The Straits Times that there are now three transitional shelters, which provide temporary accommodation for the homeless. Social workers will work with the homeless to address their problems, such as employment or family issues, and help them move into long-term housing.

The MSF hopes to move residents in these shelters into long term and stable housing within six months, but an extension of stay can be granted if it deems they need more time to resolve their problems.

Another area which Dr Ng highlighted was the Destitute Persons Act, which he felt causes the homeless much anxiety as they are afraid of being sent into welfare homes against their wishes.

The MSF spokesman said that only a small minority of those found sleeping on the streets are considered destitute under the Act. The destitute refers to those who are unable to care for themselves and have no family support. They are encouraged to stay in welfare homes for their safety and well-being. Besides, residents can be discharged when they are assessed to be ready to re-integrate into the community. 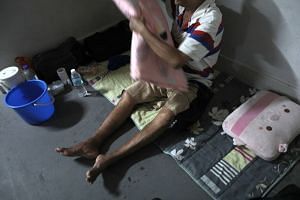 The MSF spokesman stressed that statutory powers are only exercised as the last resort in instances where the person's safety is deemed to be at risk, or when he lacks the mental capacity to make informed decisions for his own welfare.

Dr Ng also feels that the Housing Board (HDB) can improve the eligibility criteria and the space provided in its public rental flats. Under the joint singles scheme, a single person must pair up with another single person to rent a one-room flat.

Some of those sleeping on the streets have a rental unit under this scheme, but they chose to rough it out on the streets as they had conflicts with their roommate, interviews with the homeless found.

Said Dr Ng: "The joint tenancy requirement deprives residents of basic privacy, creates conflict among co-tenants and should be removed."