SINGAPORE - Asatizahs or religious teachers have a certain standing and influence in the community, and that comes with the responsibility to ensure they lead their followers based on the true teachings of Islam, said President Halimah Yacob on Tuesday (Feb 26).

These teachers can also be a great source of good in guiding the Malay community towards achieving progress and living peacefully with others, she said.

"Any view that promotes violence is wrong; what more if it is done in the name of religion and trying to appeal to the spiritual and emotional needs of people to achieve certain objectives," Madam Halimah said.

She lauded the decision of the Islamic Religious Council of Singapore (Muis) to cancel the accreditation of a former ustaz, or teacher, who propagated beliefs that were wrong in Islam and "incompatible with Singapore's multi-racial and multi-religious context, she said.

The 46-year-old freelance religious teacher, Murad Mohd Said, and one of his students - 56-year-old technician Razali Abas - were issued with restriction orders under the Internal Security Act, for propagating divisive racial beliefs, in Murad's case, and in the case of Razali, for demonstrating militant tendencies, after being exposed to Murad's teachings.

The fight against terrorism on the ideological front needs to remain strong and unwavering, Madam Halimah noted on a visit to the Religious Rehabilitation Group's (RRG) resource and counselling centre at the Khadijah Mosque on Geylang Road.

"We must not be complacent. This could be the calm before the storm. The threat of self-radicalisation persists, especially through the internet, and the authorities continue to detect people influenced by extremist rhetoric," she said. 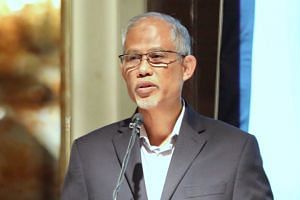 Cancellation of accreditation for unethical religious teacher is how scheme should work, says Masagos

Extremist groups continue to be active and recruiting supporters, she said, adding that Singapore must remain vigilant at all times, because this is a long term global as well as domestic challenge.

In this respect, RRG has been critical in combating terrorism and extremism in Singapore, she said.

"Today, as I went through the exhibits, I was reminded of how the critical role of the RRG in combating terrorism and extremism in Singapore has evolved and strengthened over the years, and how much we have benefited from your good work," Madam Halimah said.

Individuals like Murad and Razali usually undergo rehabilitation and counselling at places like the RRG, to steer them away from radical ideology and extremist tendencies. The RRG has also helped individuals in the early stages of radicalisation to get back on the correct path, she noted.

In addition, it educates the wider public.

Dr Mohamed Ali, vice-chairman of the RRG, said: "The RRG is open to members of the public who wish to seek clarification on radical ideology and violent extremism, and provides counselling services as well.

"We also have a helpline, for members of the community who want to clarify concepts or seek help."

Madam Halimah added that than 90 terrorism-related detainees, including many who were part of terrorist groups like Jemaah Islamiyah, have been rehabilitated, released from detention and re-integrated into society.

But there is still more to be done to counter the spread of wrong ideologies and terrorism by extremists, she said.

"The fight against terrorism on the ideological front must continue to remain strong and unwavering. We must not let dangerous ideas fester or allow them to gnaw at our social fabric.

"If any such views were to surface, we should nip them in the bud."