SINGAPORE - Besides having engineers and technicians do the necessary tests and preparations for the opening of the Downtown Line 2 (DTL 2) on Sunday (Dec 27), religious leaders were called upon to bless the MRT line's depot.

Located in Woodlands, the Gali Batu Depot is the main train stabling and maintenance facility for the Downtown Line.

Mr Khaw, who is also Co-ordinating Minister for Infrastructure, said in his post that the staff appreciated the blessing.

"Staff were appreciative of the effort. A depot is like a factory where any careless act can result in injury or worse. Safety of staff is paramount," he wrote after visiting the depot for a second time.

Mr Khaw also said on Monday (Dec 21) that commuters should expect teething problems on DTL 2 when it opens.

"The engineers told me to expect a "bedding-in" period of several months before the system stabilises," he wrote on his official blog. 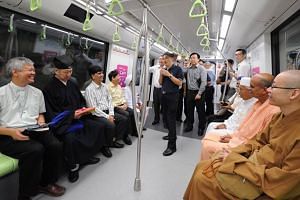 The 12-station, 16.6km DTL2 starts from Bukit Panjang, and passes through the Bukit Timah corridor towards Rochor, before connecting to the Downtown Line 1 at Bugis station.

Travel time for commuters is expected to be cut by up to 40 per cent with the new line. For example, a trip from Bukit Panjang to Bugis, which now takes about 50 minutes, will be slashed to 30 minutes.