SINGAPORE - Religious differences are often pegged as the source of tensions in diverse communities, but religion should be part of the solution as well, as most teach acceptance of others and the importance of doing good.

On Thursday (June 20), academics and religious leaders at a plenary session for an interfaith conference called on all believers to draw from what they have learnt in their own faiths to work together to promote peace.

Around 1,000 scholars, government officials, and members of religious and civil society groups from close to 40 countries are attending the three-day event.

"Religion has often been thought to provoke prejudice and bigotry. Consequently there is a temptation to see religion as a problem, thus making it a private matter, taken out of the public sphere," said Bishop Guixot, who is also president of the Pontifical Council for Interreligious Dialogue.

"But religion is not a problem. It is part of the solution of our reality. We are all called to work together in society, to do works of charity, to participate in international debate." 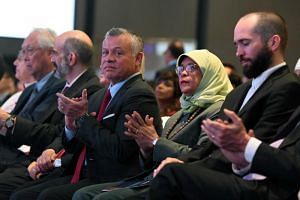 Commitment to safeguard religious harmony can be applied in schools, workplaces: President Halimah

"Through relationships with followers of other faiths, our personal growth is enhanced," said Dr Howard, an associate professor at California State University.

"The collective wisdom of religious traditions is a great asset for humanity. We as world citizens must educate ourselves and in turn, enhance our lives."

Deputy Mufti of the Islamic Religious Council of Singapore (Muis) Nazirudin Nasir touched on the importance of talking about and understanding those with different beliefs in society.

He said: "Our traditions, at least for me in Islam, prepare me to think of difference in a positive way from the very start."

Dr Nazirudin brought up as an example how reading about the prophet Abraham in the Quran encouraged him to consider the viewpoints and commentators of other faiths like Judaism and Christianity on the same topic. "The story of Abraham reminds us of our commonality and differences," he said.

Echoing those thoughts about seeking commonality despite the differences, Venerable Guo Huei, Abbot President of Dharma Drum Mountain, a Buddhist foundation, said dialogue can unite people by its very nature.

"The aim of dialogue is to seek common ground while respecting differences," he said.

He added that close cooperation between religions can eliminate or mitigate conflicts between people and nations and in turn promote diversity.

Using an analogy, he said: "Just like our human palm that has five fingers, each finger looks different. But we let the five fingers co-exist. Because of that, our hand works and we can get its benefits."

On how not to fall into a superficial discussion about religion and faith - which may breed misunderstanding - author of numerous books on religion Karen Armstrong said people of different communities need to have honest discussions.

"Go right to the heart of it. It is about being human. It is about how we can live together," she said. "It is about imagining yourself in other people's circumstances so that you will enlarge your understanding and make a place for them in your minds and hearts."

The conference, held at the Raffles City Convention Centre, ends on Friday.