SINGAPORE - Couples who plan to get married in 2022 can look forward to doing so in a refurbished Registries of Civil and Muslim Marriages (ROM and ROMM) building.

The interior spaces of the 36-year-old iconic building, located in Canning Rise, will be spruced up as part of a collaboration with three institutes of higher learning, said Minister for Social and Family Development Desmond Lee on Monday (March 11).

"Saying 'I do' is the first of many memories that couples experience in their lives together, and a strong marriage is the foundation for happy and loving families," he said.

"As the registries have borne witness to many generations of couples getting married, the collaboration with design school students is a wonderful opportunity for them, as potential future users of ROM and ROMM, to shape this iconic building."

Works are likely to begin by mid-2020 and could take around 12 to 18 months to complete. Operations at the registries will not be affected during the refurbishment

Over the course of a year, 150 students from the Singapore University of Technology and Design, Temasek Polytechnic and Ngee Ann Polytechnic will help redesign the building's interiors as part of their school curriculum.

Among the students involved is Ms Siti Nur Diyana Wan Rosman, 22, a third-year student at the School of Design and Environment student in Ngee Ann Poly. 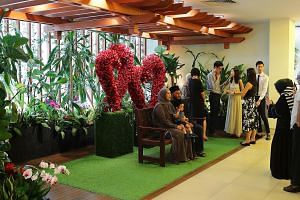 Registry of Marriages: Where love is always in the air

She said: "I want to focus on enhancing the experience for the couples who are coming here to solemnise their weddings. For instance, the queue number area at the entrance seems very polyclinic-style...

"Perhaps we can turn it into a lounge-style that can help create a bond and promote more interaction between the couples. This collaboration gives me a sense of belonging and ownership."

The registries, originally located in Fort Canning Park, moved to its current premises in 1983. It was last renovated in 2010, when the ROM and ROMM entrances, previously in separate locations, were combined.

ROM was set up in 1961 and the latter in 1978. Since they were set up, about 1.3 million civil and Muslim marriages have been registered.

There are about 36 civil marriages and four Muslim marriages registered each day at ROM and ROMM respectively, according to the Ministry of Social and Family Development.