SINGAPORE - Ustaz Syed Ahmad Syed Mohamed will step down on Oct 22 as the Registrar of Muslim Marriages after 14 years in the post.

Ustaz Nor Razak Bakar, 53, who has been the deputy registrar and a kadi (marriage solemniser) for 20 years, will succeed him.

The appointment was announced by Senior Parliamentary Secretary for Social and Family Development and Education Muhammad Faishal Ibrahim on Monday (Oct 14) at an appreciation ceremony organised by the Ministry of Culture, Community and Youth (MCCY) in Novotel Hotel.

Associate Professor Faishal said: "Ustaz Syed Ahmad has made significant contributions in the building of strong Muslim marriages, and is one of our foremost experts of Muslim family law in Singapore."

He added that Ustaz Syed Ahmad will continue to be a kadi after his retirement and will also serve as an ad-hoc president with the Syariah Court.

Ustaz Syed Ahmad, 65, is the third registrar for Muslim marriages after the Administration of Muslim Law Act was enacted in 1966. He succeeded Ustaz Pasuni Maulan. The first registrar was the late Ustaz Haji Abu Bakar Hashim.

Ustaz Syed Ahmad began his public service career with the Islamic Religious Council of Singapore (Muis) in 1980. He served as president of the Syariah Court between 1993 and 1995 before returning to Muis in 1996. He remained in Muis until 2004.

In 2005, he was appointed as Registrar for Muslim Marriages.

During his tenure, the Registry of Muslim Marriages enhanced its support for early-risk marriages by mandating that couples - where at least one party is below 21 years of age - should attend a marriage preparation programme. This was implemented in 2017.

The Mufti of Singapore, Dr Mohamed Fatris Bakaram, said on Monday: "I have known Ustaz Syed Ahmad for 26 years... he has helmed the Registry of Muslim Marriages with much dedication. I am thankful for the opportunity to work with him on matters related to the administration of Muslim marriages and appreciate his contributions to the community." 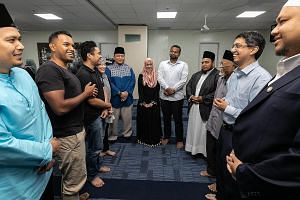 Most recently, Ustaz Syed Ahmad worked with marriage solemnisers, or naib kadis, on the Bersamamu initiative launched in July.

Under the initiative, Muslim couples applying to register their marriage must first meet a naib kadi before their solemnisation ceremony. The naib kadi will continue engaging with the couple over the next two years to help build a strong marriage.

In an effort to strengthen the programme, Prof Faishal on Monday also announced that more deputy marriage solemnisers would be joining the registry. From Tuesday, the number of naib kadis will increase from 27 to 39.

Highlighting how couples had been appreciative of the Bersamamu programme, Prof Faishal said: "Couples felt that the naib kadis' presence in their marriage journey makes them feel supported because they have someone to turn to for advice in the initial years of their marriage."