Registration for children starting Primary 1 (P1) next year will begin on July 3 and end on Oct 31, the Ministry of Education (MOE) said yesterday.

Children born between Jan 2, 2013, and Jan 1, 2014, have to be registered for admission to next January's Primary 1 classes. The list of primary schools and vacancies available can be found on the MOE's P1 Registration website.

The earlier phases - 1 and 2A - are for children whose siblings are current pupils of the school, and children whose parents are members of the alumni association, the school advisory or management committee. Phase 1 starts on July 3 and Phase 2A on July 9.

Parents registering their younger children under Phase 1 can submit the registration form and documents through their older children, who will receive the form from their schools.

Phase 2B, which starts on July 22, is for children whose parents have volunteered in schools, have affiliations to churches or clan associations linked to the schools, or are active community leaders. For Phases 2A and 2B, parents can submit the registration form and documents at their school of choice.

Those with no links to the schools will have to register in Phase 2C, starting on July 30. Parents can register their children via the Primary One Internet System (P1-IS) using their SingPass.

The Phase 3 registration for international students will begin in late October. Admission during Phase 3 is not guaranteed as there are limited vacancies after places have been allocated to children who are Singapore citizens or permanent residents. 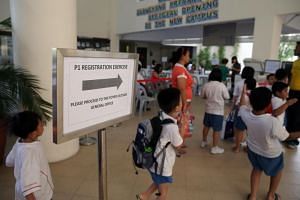 Ask Sandra: How to pick a primary school for your kid

The MOE also announced fresh plans for Valour Primary School and Northshore Primary School, two new schools for the rapidly growing town of Punggol which were previously due to begin operations next year.

The MOE said that Valour Primary's premises will be ready only in February next year due to delays in construction.

Valour Primary and its co-located MOE Kindergarten @ Valour will still welcome its first pupils next year, but will operate from nearby Punggol Cove Primary for one term, from Jan 2 to March 13.

The primary school and kindergarten will move to their permanent campus at 49 Punggol Central on March 23 next year.

Meanwhile, the Northshore Primary and MOE Kindergarten @ Northshore campus is on track to be ready by January next year, but its opening will be delayed to 2021 instead. It is also being built using PPVC.

It is in a new housing estate in Punggol North, where demand is expected to be very low, since the first batch of Build-To-Order flats there will be completed only in the second quarter of 2020.

Children who have secured places in primary schools under the home-school distance priority scheme will be required to live at the address for at least 30 months from the start of the P1 registration exercise, the MOE said.

If the child's grandparents or the parent's sibling is the caregiver of the child, parents may register their child using the address of the caregiver. Only one parent will need to submit the statutory declaration form and documents in person at the MOE customer service centre.

Those found to have supplied false information will be referred to the police for investigation.

A version of this article appeared in the print edition of The Straits Times on May 24, 2019, with the headline 'Register for next year's P1 places from July'. Subscribe
Topics:
More
Whatsapp Linkedin FB Messenger Telegram Reddit WeChat Pinterest Print Purchase Article Copy permalink