Countries will be more secure in a region where international laws and other norms are respected.

They will also be more prosperous when there are open markets that allow for free trade, Australian Minister for Defence Christopher Pyne said yesterday.

The SLD brings together defence ministers, senior officials and security experts to exchange views on key issues that shape the region's defence and security landscape.

In his speech, Mr Pyne highlighted the importance of forming and maintaining open partnerships in the region and keeping to a rules-based international order.

"In the Indo-Pacific's vast maritime domains, where global commons abound, it is all the more important that free and open access to oceans is fostered and rules governing maritime behaviour are followed," he said.

"Countries will be more secure in a region characterised by respect for international law and other norms, where disputes are resolved peacefully, without the threat or use of coercion or force." 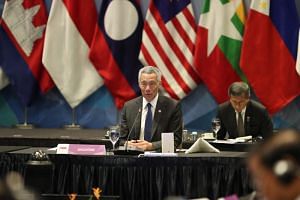 Progress in review of FTA with Australia, NZ

Mr Pyne added that countries can also prosper more when there are open markets that facilitate the free flow of trade, capital, technology and ideas.

In an age where the rules-based global order continues to be challenged, he added, countries must seek a balance that supports prosperity and helps to protect the interests of all states, both large and small.

The ministers welcomed the steady progress made in the joint development of training areas and advanced training facilities in Queensland, which will benefit both the Singapore Armed Forces and the Australian Defence Force.

They also discussed regional and international security developments, including the need to enhance regional counter-terrorism cooperation and reaffirmed the value of key security platforms such as the Asean Defence Ministers' Meeting-Plus and the Five Power Defence Arrangements in addressing contemporary security challenges.

As part of his visit, Mr Pyne also called on Prime Minister Lee Hsien Loong at the Istana.

Around 90 delegates from countries regularly represented at the SLD are participating in this year's meeting.

The SLD has been hosted in Singapore since 2013.