Ministers and MPs arrived at the Padang on Friday (Aug 9) to celebrate the nation's 54th birthday in intricate outfits, many of which were from Singapore designers and labels, or had strong Singaporean influences.

Patterns, some intricate, were also popular among many MPs. 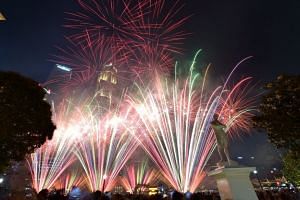 27,000 turn up at the Padang for Singapore's bicentennial birthday bash

NDP 2019 blog: Relive the action at the Padang

Senior Minister of State for the Environment and Water Resources Amy Khor sported a dress by local designer Anne Tan that had a white skirt and a red bodice with embroidered floral designs.

Second Minister for Education and Finance Indranee Rajah wore a champagne-coloured blouse with a Mandarin collar and rose embroidery.

Jalan Besar GRC MP Lily Neo was clad in an intricate red dress with embroidery and sequins that she designed herself.

Like last year, MacPherson MP Tin Pei Ling wore a capelet but swapped 2018's white capelet with a cheongsam-inspired collar for a red one with white floral prints.

Some MPs highlighted accessories by home-grown designers and labels.

MPs from the Workers' Party donned shirts in various shades of red, for instance.