The Red Lions, those daredevil freefallers who have been a fixture at every National Day Parade since 1996, may not be able to land right in front of spectators when the Aug 9 show moves to the National Stadium next year.

Instead, they will have to look for alternative landing spots outside the iconic domed-roof arena.

The Straits Times understands that the venue's narrow roof opening may prove difficult for the skydivers to land inside the arena.

Acknowledging this possibility, Major Arnold Low, 39, who is leading this year's display team of six Singapore Armed Forces regulars, yesterday said they have not scouted the area or finalised next year's plans, but are "not ruling out jumping in the vicinity" of the stadium.

For now, the Red Lions are focused on ensuring this year's jump at the Padang goes without a hitch for the nation's 50th birthday. But nothing replaces the actual jump. The more you practise, the safer it is.

Since April, the parachutists have stepped up their training, leaping from 10,000ft.

Besides jumping out of planes, the Red Lions also started using parachute flight simulators this year. These machines, equipped with harnesses, motion sensors and video goggles, allow the skydivers to practise their leaps indoors. They can also be put through parachute malfunction scenarios, such as a torn canopy, to fine-tune their emergency drills.

Although the simulators are primarily used by beginners, the Red Lions, who have clocked between 800 and 2,750 jumps, use them monthly to sharpen their skills, said Maj Low.

The team also trains in a wind tunnel, which opened on Sentosa in 2011. Called iFly Singapore, the facility helps improve body stability during simulated freefalls.

"But nothing replaces the actual jump," Maj Low stressed. "The more you practise, the safer it is."

Getting the landings right at the Padang is also more challenging.

Although the 120m by 80m stage is bigger than the one on the Marina Bay floating platform, the numerous buildings in the area deliver more air eddies.

During a parade rehearsal earlier this month, a Red Lion had to cut off his first parachute after it went into a twist. He eventually landed safely with a backup canopy. 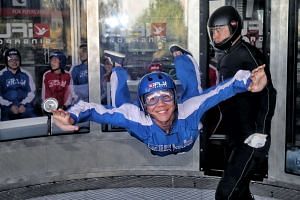 Gone with the wind tunnel

Five-time NDP Red Lion Ivan Low, 41, who has 1,400 jumps under his belt, said this year's performance will be a "once in a lifetime" experience.

The First Warrant Officer added: "It's a significant year and I feel very privileged. I've done many jumps, but this one will be special."

In the spirit of National Day, we asked readers to share their favourite spots in Singapore through Instagram. Explore some of these submissions with the #myspotinthedot interactive map. http://str.sg/ZgSg

A version of this article appeared in the print edition of The Straits Times on July 29, 2015, with the headline 'Red Lions set for jump of a lifetime'. Subscribe
Topics:
More
Whatsapp Linkedin FB Messenger Telegram Reddit WeChat Pinterest Print Purchase Article Copy permalink