The Singapore Red Cross has received almost $80,000 in donations from people in Singapore to aid ongoing relief efforts in Indonesia's Sunda Strait.

The tsunami on Dec 22 claimed at least 400 lives, injured thousands and displaced more than 40,000.

The money, which is being collected through an ongoing month-long public appeal, will go towards buying relief items for displaced survivors and longer-term recovery and rebuilding efforts.

In a media release last Thursday, the Singapore Red Cross said a two-man volunteer team had arrived in Banten province, one of the worst-hit areas.

The disaster struck the seaside area of Pandeglang during the peak holiday season, when it was crowded with tourists.

The team made it there last Wednesday, just before the Indonesian authorities rerouted all flights around the erupting Anak Krakatau volcano, which sits between Java and Sumatra islands.

The Singapore Red Cross team is working with their Indonesian counterparts in their relief efforts. They are with 400 Red Cross staff and volunteers delivering medical services and supplies to survivors, cleaning debris and helping with search and rescue efforts in the provinces of Banten and Lampung.

An eruption at the Anak Krakatau volcano in the Sunda Strait, which separates Java and Sumatra, on Dec 22 caused a section of the crater to collapse and slide into the ocean, displacing a large volume of water and triggering killer waves as high as 5m.

Singapore Red Cross secretary-general and chief executive Benjamin William said that the charity started preparing for relief work within a day of the disaster, which allowed them to secure flights on short notice.

The team flew to Jakarta before flights were cancelled. 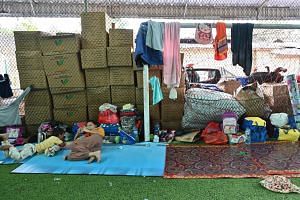 About $80,000 raised in Singapore for Indonesian tsunami relief efforts

It was reported last Thursday that Indonesia had imposed a no-fly zone around the volcano.

Mr William said: "The safety of our team remains of utmost importance and we will continue to keep in close contact with our volunteers over the course of their mission."

So far, there have been no reports of Singaporeans affected, but the Singapore Red Cross has activated its Restoring Family Links service to help Singaporeans and Indonesians locate family members who may have been affected by the disaster and with whom they have difficulty contacting.

The organisation said rescue efforts have been hampered by torrential rain and blocked roads, with the local authorities warning of extreme weather and high waves around the erupting Anak Krakatau.

The Singapore Red Cross said it will continue to monitor the situation closely and work with its ground partners to render appropriate aid to the affected communities.

People who wish to contribute to the relief efforts as part of the Singapore Red Cross fund-raising appeal from Dec 26 to Jan 25, may do so via:

• An online donation at redcross.give.asia/sundastraits2018;

• A cheque donation to the "Singapore Red Cross Society", to be posted to the same address above.

Donors should leave their name, postal address, and indicate "Sunda Strait Tsunami 2018" on the back of the cheque.