SINGAPORE - For aquarium lover Felicia Tay, going from creating a miniature world for fishes to making mossariums was a natural progression.

"One day we decided to take the water aspect out of it and try to make plants thrive in mini jars," said the 29-year-old who used to work in advertising.

Not content with just putting plants in bottles, they set out to recreate scenes of a cherished memory.

Many people get them as gifts during Valentine's Day and the Christmas season.

Young couples would ask for a  recreation  in the mossarium  of  how  they first met, like the one done that depicted two figures at Seletar Reservoir. 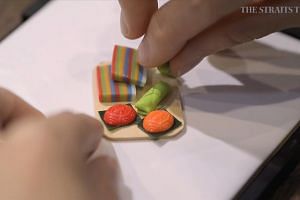 Ms Tay said one of the most challenging mossariums the team made was that of a detailed recreation of a kampung for a customer's mother.

"There were many, many details that she wanted to put in like lemon trees," she said.

"There had to be one particular black chicken with a white chicken. So we had to find these things."

Mossimoto uses materials imported from Japan and Europe and the mossariums cost between $30 and $450 each depending on the size of the jar.