SINGAPORE - Police have issued a public advisory on counterfeit currency notes after they received several reports between March and May of fake portrait series notes being used at convenience stores, restaurants and retail outlets.

Three men, aged between 25 and 29, were arrested and charged with the alleged offences between May 25 and June 4, while a 30-year-old woman was arrested on Sunday (June 23) for using counterfeit $50 notes on 10 occasions.

The portrait series, the fourth set of currency notes to be launched here, is the one currently in circulation. Notes from the series feature a portrait of Singapore's first president, Mr Yusof Ishak.

In their advisory on June 11, the police advised members of the public to be wary of receiving counterfeit currency notes, and shared some ways to identify these notes:

1. They lack a security thread

The counterfeit notes, which are believed to be photocopied or printed reproductions, lack certain features found on genuine notes, such as a security thread which is interwoven in the paper running vertically down the face of the note. When held up to the light, the thread appears as a bold continuous line and it shows a series of text featuring the denomination numeral of the note and the word ‘Singapore’ in the four official languages.

2. They have no watermark 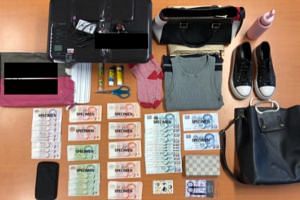 3. Fake notes may have a simulated kinegram

The kinegram - an octagonal reflective foil - found on a fake note is distinctively different to that on a genuine currency note.

The image on the kinegram on a genuine note should shift when the note is tilted, while the simulated kinegram on the counterfeit note does not have this characteristic.

4. Fake notes lack the feel of an embossed surface

The police say the surface of counterfeit notes may lack the embossed "feel" that genuine notes have. According to MAS, the portrait of the late President Yusof bin Ishak which dominates the portrait series notes is hand-engraved and printed in intaglio ink. This portrait serves as a unique anti-counterfeiting feature. The fine lines of the engraving are difficult to imitate or reproduce.

So what should you do if you suspect you have received a fake note?

Those who suspect that they have received fake currency notes should make a report at their nearest neighbourhood police centre or delay the person who gave the suspected fake note and call the police immediately.

They should take note of the person's details, such as gender, race, age, height, built, clothing, the presence of any tattoos, the language or dialect spoken, and the vehicle the person is using, if any, as well as its registration number, the police said.

They should also place the suspected counterfeit notes in a protective covering, such as an envelope, to prevent further tampering before handing them to the police.