For the first time in more than 20 years, Singapore will be able to witness the rare sighting of an annular solar eclipse.

The day after Christmas, on Dec 26, people here can catch the vision of a dark Moon encircled by a ring of light. But those in some parts of the southern Pacific Ocean, Chile and Argentina can see a total solar eclipse earlier, on July 2.

A solar eclipse is caused by the Moon moving between the Sun and Earth in its orbit, blocking the Sun's light from reaching Earth.

In an annular solar eclipse, the Moon covers the Sun's centre but is too far from Earth to entirely blot out the Sun, leaving the Sun's outer edges visible in a "ring of fire".

One must be situated in the region from which the Moon appears completely within the Sun's disc of light to catch an annular solar eclipse.

Mr Remus Chua, who founded SingAstro (an online astronomy forum) and the NUS Astronomical Society, both in 1997, explained the rarity of the Boxing Day event: "The path of solar eclipses is usually a thin narrow line that cuts across the Earth. The opportunity for such clean lines to intersect with a small island like Singapore, allowing the phenomenon to cut across the whole country, is very rare."

While the 43-year-old geospatial consultant has been an astronomy enthusiast since 1992, he has yet to experience an annular solar eclipse and looks forward to seeing it with his own eyes. He expects scientists and tourists to make their way to Singapore to catch sight of it too.

During the eclipse, there will be partial darkness, as if it were twilight. Mr Chua described solar eclipses as having a "dynamic ambience". When the Moon covers the Sun, there will be a change in wind conditions and people will experience stronger wind in open areas.

On Dec 26 at 11.27am, Singapore will experience a partial solar eclipse, where the Moon blocks part of the Sun and gives the appearance of a dark shadow on the Sun. This will evolve into an annular solar eclipse at 1.22pm, when the Moon crosses directly in front of the Sun. The eclipse will reach its peak at 1.23pm as the Moon is closest to the Sun's centre then.

According to the Astronomical Society of Singapore, the annular solar eclipse is best seen from the southern part of Singapore, where the ring of light around the Moon will appear more even in thickness, as compared with in the north. 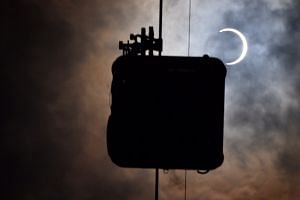 To view the phenomenon safely, one should use solar filter glasses, which can be bought from Science Centre Singapore.

For a less exciting but sooner-to-occur eclipse, there will be a thin partial lunar eclipse passing over Singapore on July 17.

As a result of orbital alignment, solar and lunar eclipses always occur in pairs, with a space of about two weeks between them. This eclipse follows the July 2 total solar eclipse.

Between 2.43am and 8.17am, people in Singapore can see, without eye protection, a dark shadow on the Moon as a portion of it passes behind Earth and into its shadow.

A version of this article appeared in the print edition of The Straits Times on June 15, 2019, with the headline 'Rare 'ring of fire' around Moon will be visible from S'pore'. Subscribe
Topics:
More
Whatsapp Linkedin FB Messenger Telegram Reddit WeChat Pinterest Print Purchase Article Copy permalink